Coquille is one of those restaurants that have been on my list since their opening but took me forever to actually visit. This second restaurant by John Liu – the first being the neighboring Italian trattoria Scarpetta – was originally headed by Chef Anna Bautista, best known for her time running the show at Michelin-starred Madera in Menlo Park, CA. But last year, Chef Bautista moved on to become consulting chef at several dining concepts around town, including Chez Maurice and Al’s Diner, so the kitchens at both Coquille and Scarpetta were taken over by Chef Jason Oakley, who trained at The French Laundry and previously worked as head chef of Mandarin Oriental’s much-loved Fifty 8° Grill.

Coquille bills itself as an upscale French bistro with an emphasis on fresh seafood, and has long been hailed as one of the best French restaurants in Shanghai. Yet my (belated) first visit, while good, was slightly less spectacular than I had hoped. But let’s start with the good. 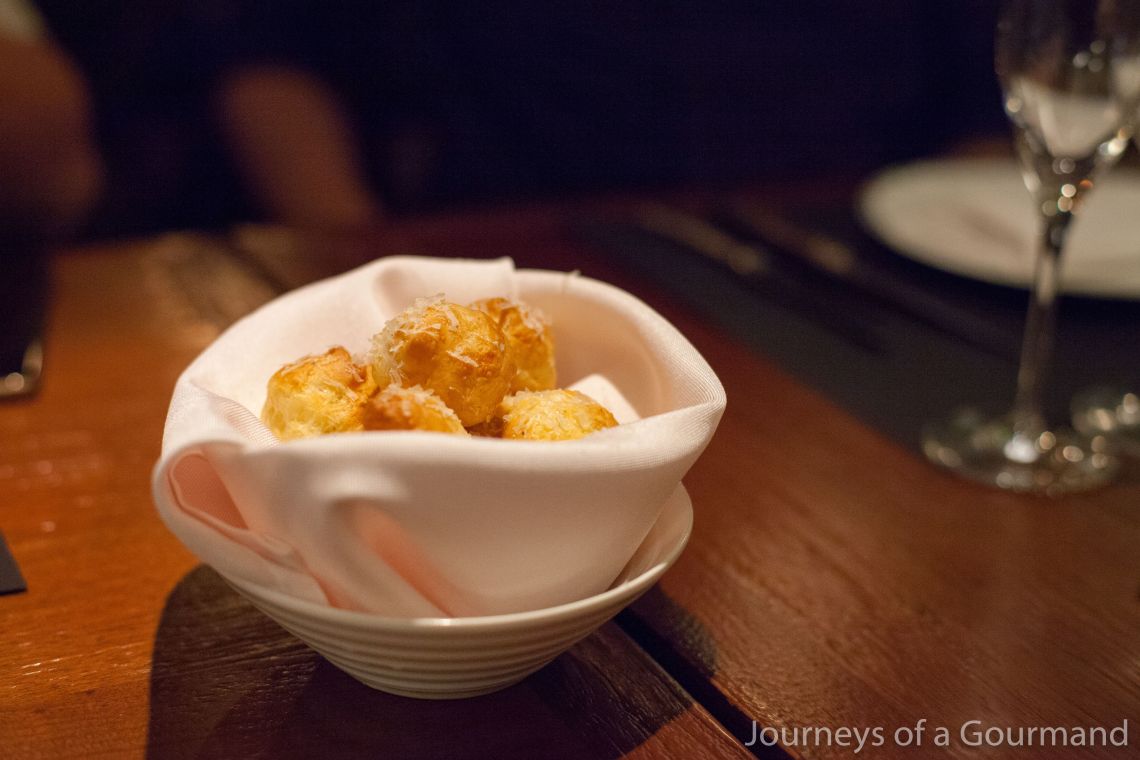 We came specifically for Coquille’s famed Beef Wellington (658), which is served only on Wednesdays (ask them to reserve one for you when booking your table), and is large enough to feed at least 3 people. It was the undoubted pièce-de-résistance of the evening. After 35 minutes in the oven, it was brought to the table in all its golden-crusted glory, looking so crispy that I could almost hear it crackling simply looking at it, before being taken back to be carved.

A few anticipation-filled minutes later, it returned in six glistening, glorious pieces. The filet was cooked to a beautiful medium-rare (although the pieces at the ends leaned more towards medium), and was wrapped, along with a piece of foie gras, in flaky puff pastry and a layer of mushroom duxelle. I seem to recall a thin piece of prosciutto sandwiched between the puff pastry and the duxelle when this dish first graced Coquille’s tables, and I wish it had remained, for the dish was just slightly bland without that layer of salty ham. Nonetheless, it was still luxurious and immensely satisfying, with the fatty foie gras complementing the lean filet perfectly. The accompanying mashed potato needed a dash more salt to bring out the truffle flavor, but the slender stalks of grilled asparagus were tender and flavorful.
Recommend: yes

Appetizers also had their moments. The tender Escargots (88), accentuated by a low murmur of lemongrass, Kaffir lime, coriander, and red curry, would sooner transport you to Bangkok than to your favorite Parisian bistro. Is that a bad thing? We thought not.
Recommend: yes

Crispy Frog Legs (98) too were a beautiful thing. The meaty legs were succulent and delightfully flavorful, enveloped in a crunchy but greaseless batter. But the green sauce on the bottom, vibrant-looking as it was, actually tasted rather insipid and lifeless – quite curious, considering it was made with watercress, which usually has a very strong flavor. Sauce not withstanding, this was still a very solid dish.
Recommend: yes 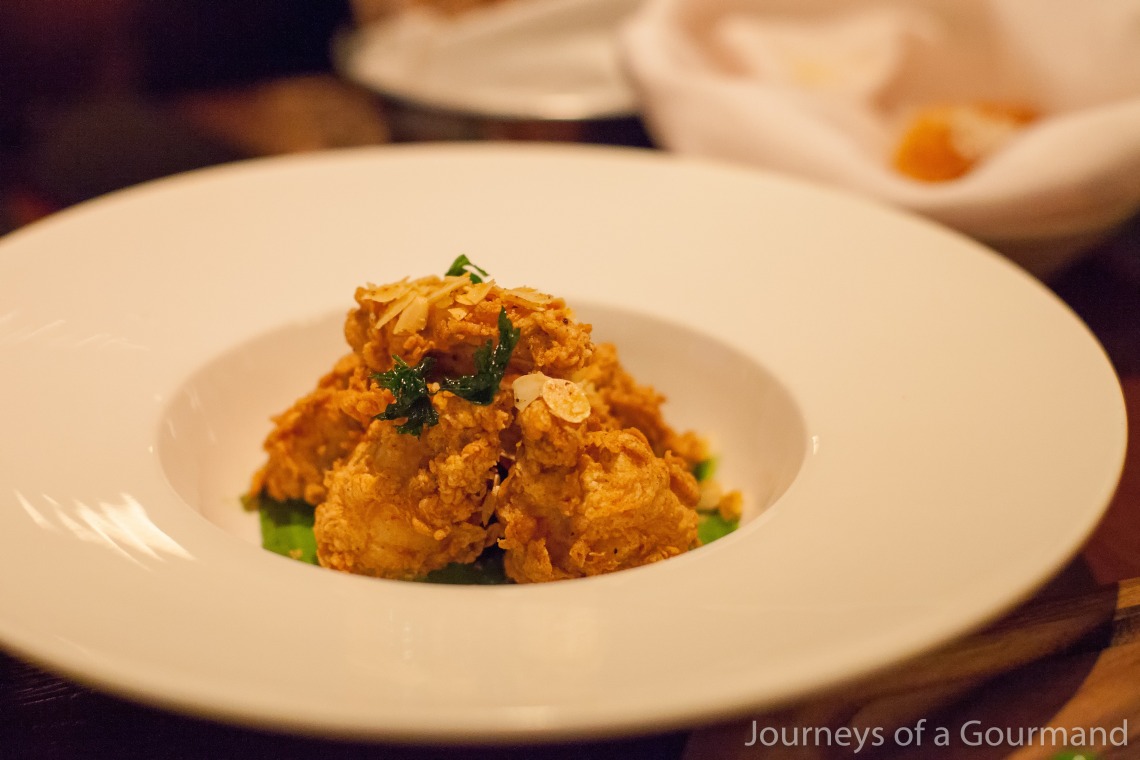 I wish that was all there is to Coquille. Sadly, it wasn’t. Our two other appetizers raised not so much discontent as a twitch of the eyebrow. The Home-Made Country Paté (88) was rich and flavorsome, but rather dry, while the Grilled Octopus and New Crop Potato (98), a dish we had high hopes for, presented us with chunks of octopus so soft they were just a step away from becoming mushy. I suppose soft octopus is preferable to chewy, bouncy octopus, but I would have liked a little texture to be preserved. On the other hand, the potatoes were wonderfully fresh and worked deliciously well with the light tinges of citrus and heat.
Recommend: maybe 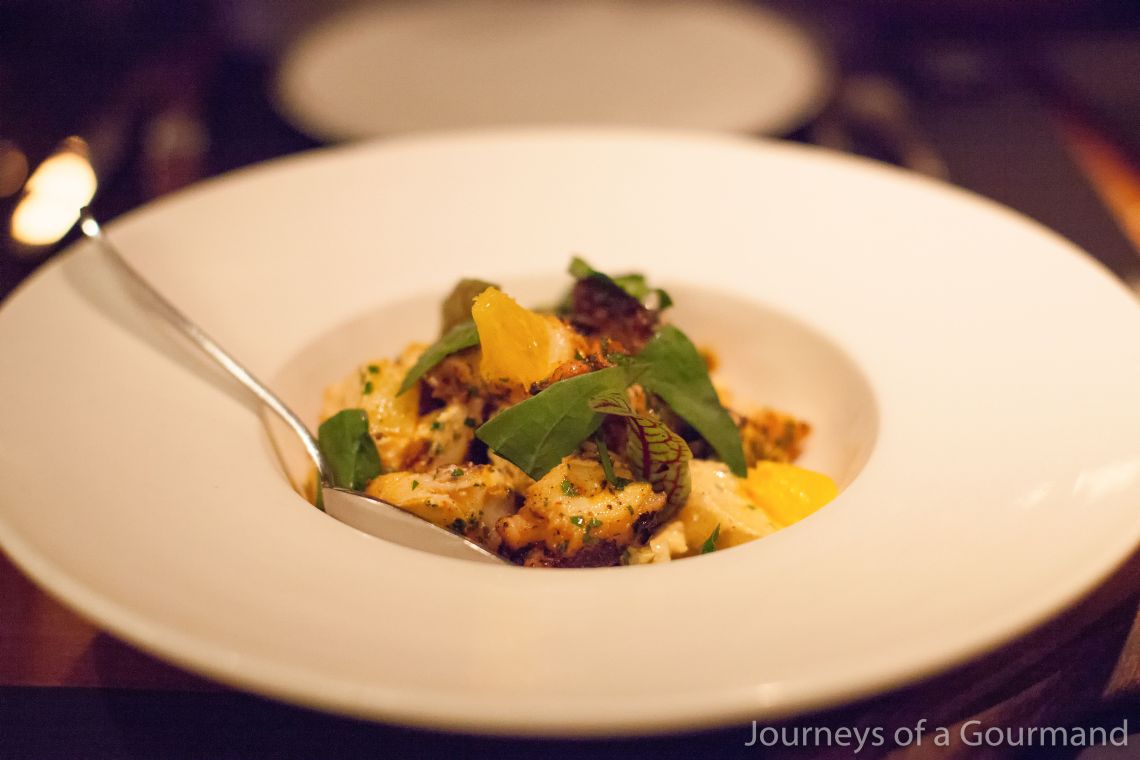 Unfortunately, the biggest disappointments of the evening came in the form of desserts, which was a big let-down for me since I had heard great things about their desserts from the Shanghai Girl. The Madeleines (38) had a strangely doughy and chewy texture that was miles away from the fluffy delight I expected, while the Clafoutis (68) sporting a liberal amount of air pockets tasted overcooked and unpleasantly eggy. The only saving grace was the raspberry sorbet on top.
Recommend: not really

The Chocolate Soufflés (98), slightly undercooked and runny in the center, were served with a small jar of caramel sauce and a salted caramel ice-cream that was almost too salty to be a dessert. However, we liked this dessert slightly more when we discovered that the three components made a bit more sense together than they did separately. The caramel sauce was quite dark, rounding out the saltiness of the ice-cream nicely and enriching the soufflés, which could have been more chocolaty.
Recommend: maybe 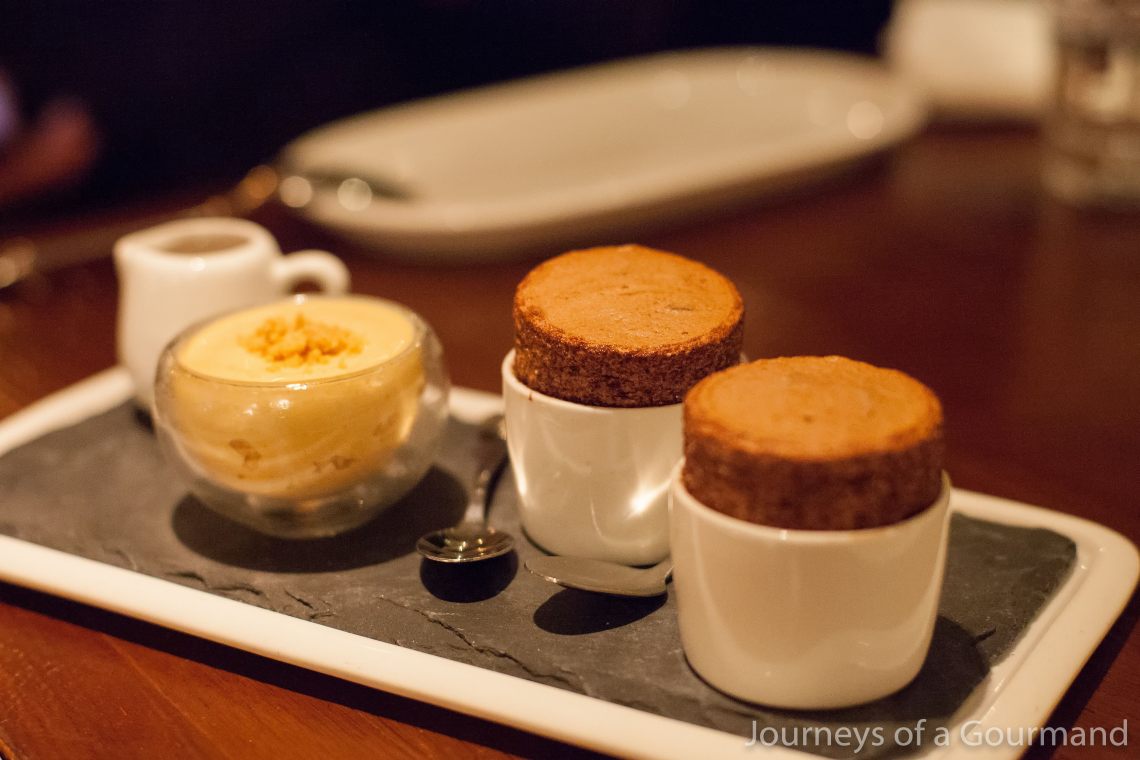 My first encounter with Coquille might not have been quite as gratifying as I had hoped, but to be fair, it was also much less damaging to the wallet than I had imagined. With a very good bottle of Pinot Noir, our bill came down to less than RMB400 per head. (The madeleines and clafoutis were generously comped on the house, but to be honest, we would have been perfectly full without them – and probably happier too.) All things considered, I can definitely see myself coming back to try some of their other dishes – the Oven-Roasted Dungeness Crab, for instance, came highly recommended, but at a rather unforgiving price (usually around RMB800). That said, I would probably still skip dessert…