The first course among the dozen or so I had at Bo Shanghai was a La Royale oyster in a skirt of verdant coriander oil and a hat of preserved chili jelly and fermented chili powder. The progression of flavors was layered with an improbable level of clarity – sharp acidity faded into briny freshness; a back hit of chili followed, mellowing out with the smoothness of coriander oil, before finishing with a lingering umami. You would be hard-pressed to find such complexity and dimensions in traditional Chinese cuisine, but it was no stretch at all to see the Hunan influence under which the dish was conceived. 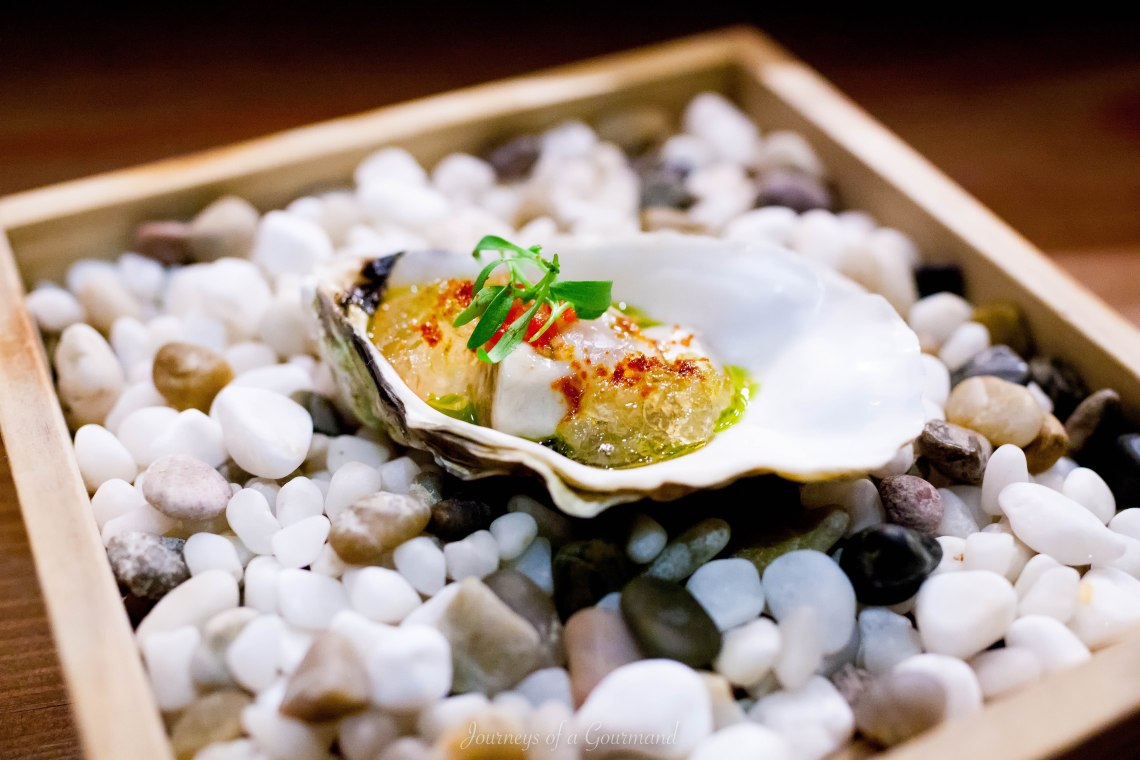 And that is precisely what Bo Shanghai is about – interpreting the ingredients, flavors, and cultures of Chinese cuisine through a global lens.

Chef-owner Alvin Leung is no stranger to breaking boundaries. At his first restaurant, Bo Innovation in Hong Kong, Chef Leung broke new ground by taking a molecular approach to Chinese cuisine, putting him on the map and earning him three Michelin stars. For his second restaurant, however, Chef Leung turned away from the path he pioneered with Bo Innovation, choosing instead to create a new philosophy.

Given the length to which Bo Shanghai has gone to build a new concept and distinguish itself from its sibling, it was somewhat surprising to see it inherit the famous amuse-bouche of Bo Innovation. The molecular xiaolongbao, a modern homage to a Chinese tradition, is a perfectly fitting herald at Bo Innovation, but at Bo Shanghai, its relevance begins and ends with its Shanghainese roots.

Fortunately, the kind of fusion that Bo Shanghai engages in is in fact a lot more insightful than the amuse-bouche might have led me to believe, taking inspirations from regional Chinese cuisines and retelling them in its own words. That level of insight was reflected in the Hunan-inspired oyster, and again in a plate of botan shrimps, paired with Longjing tea in a refreshing take on a Zhejiang classic. Wisps of bitterness from the Longjing tea foam and oil, saltiness from the caviar, and richness from the egg yolk all swirled gently around the sweet and glutinous botan shrimp, coming together in a flowing, sensual aria remarkable in its subtlety but also its structure. 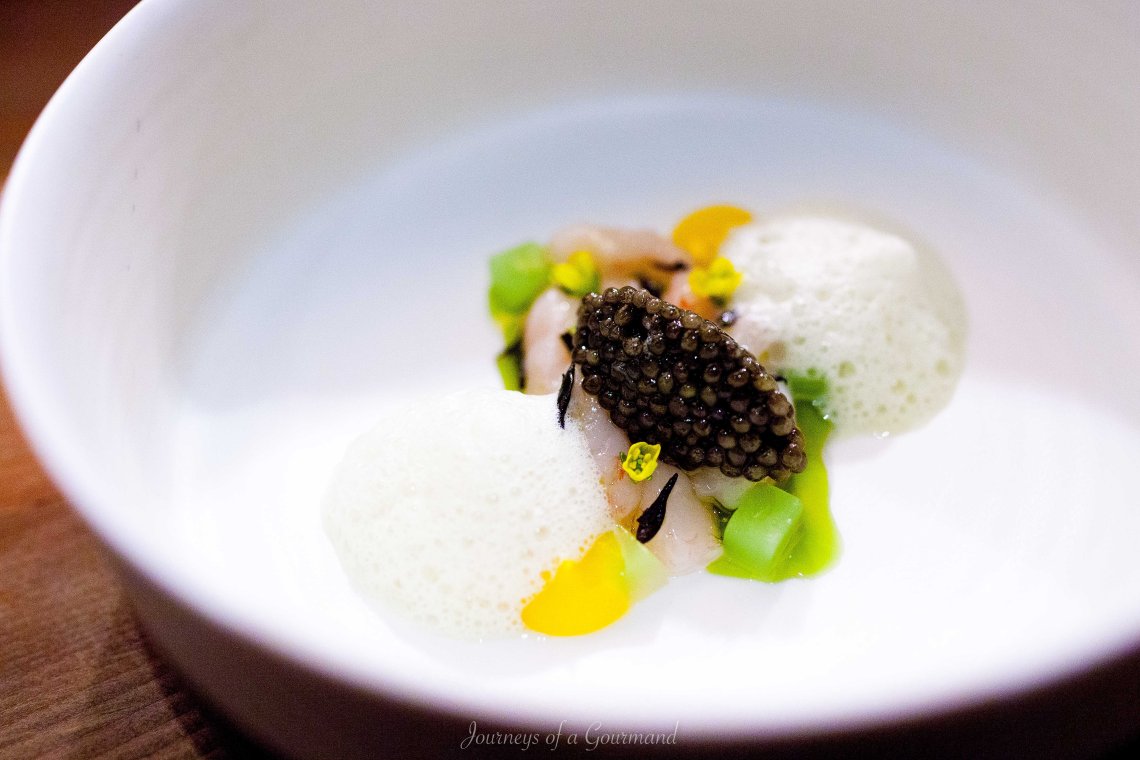 Chef Leung and his Shanghai team, helmed by chef-de-cuisine DeAille, designed their first menu around the element of umami found across China’s eight regional cuisines. A fillet of monkfish in a pool of matsutake cream sauce was flecked with ham from Anhui to evoke the kind of umami found in the dried and cured ingredients favored in the region’s cuisine. The salty ham brought out the sweetness of the monkfish, but was a little too scarce for my taste. Still, this was some wonderful, subtle cooking.

Bo Shanghai is at its best when it employs Chinese ingredients to create its own rendition of French classics, such as their Shandong-inspired take on bouillabaisse, reworked with geoduck, langoustine, millet, and abalone. The traditional rouille-slathered bread was replaced by a friend polenta cake and a black garlic rouille swirled into the broth, providing ballast to the layers of umami. In similar fashion, Wagyu beef was laid on top of a spiral of lychee purée and accompanied by pickled pearl onions and a sauce of Fujian red rice wine, creating an intriguing symphony of sweetness and tanginess. 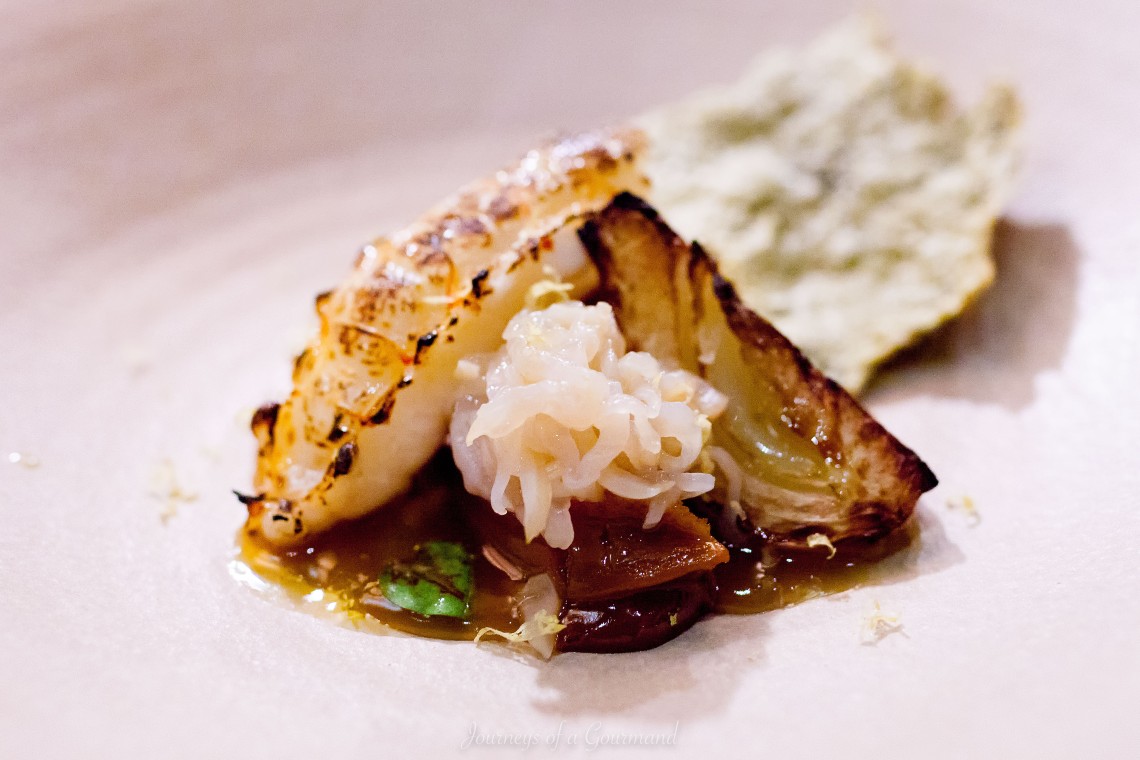 In their interpretation of the Cantonese zongzi, Bo Shanghai reverses the creative process, replacing the traditional ingredients in this Chinese staple with French substitutes, rather than the other way around. Sarrade ham took the place of ground pork, while cèpes stood in for shiitake mushrooms. With a sauce Perigord and some shaved white truffle completing the look, this is probably the fanciest zongzi in the country. 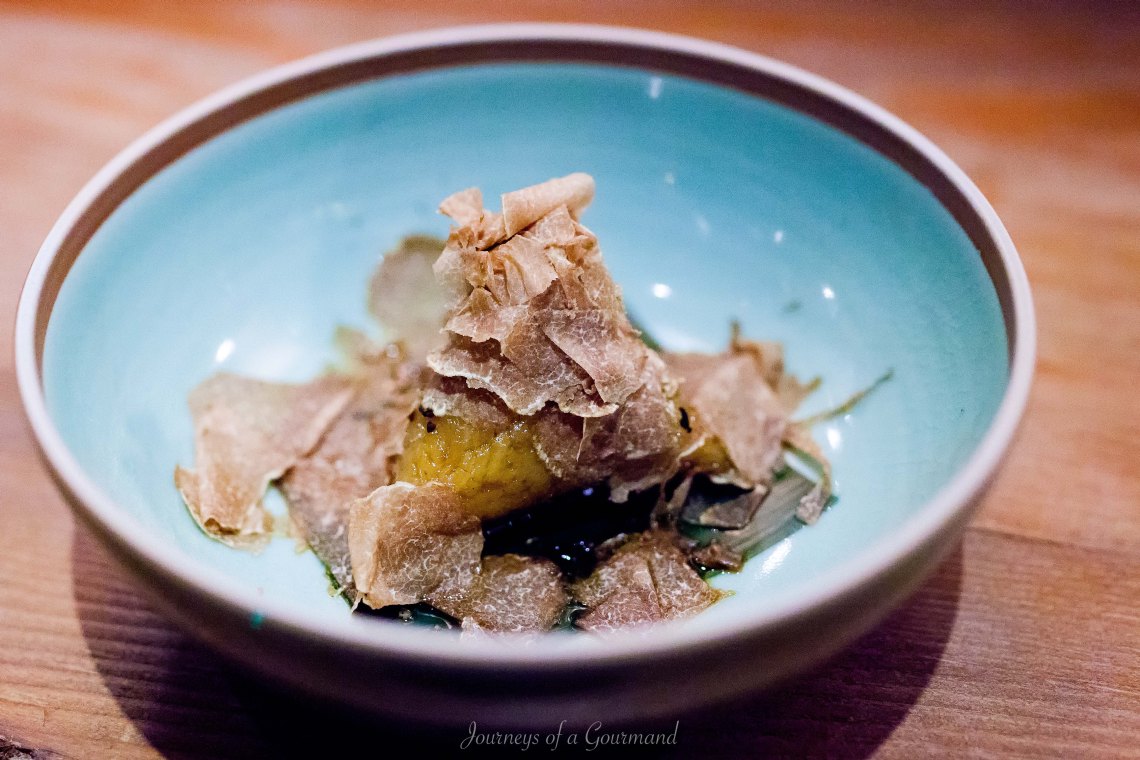 Bo Shanghai’s chefs clearly have a lot to say, but at times, you wish they wouldn’t say it all at once. In a marriage of Szechuan spices and Provençal herbs, a beautifully-seared foie gras was paired with chili, cumin, green peppercorns, and lavender. The fusion might have made sense had it stopped there, but instead took a confusing turn with a tongue-numbing confit duck kidney, and the curl of pickled tripes didn’t add any clarity.

The union of tempura-style eel, smoked butter, water chestnut, and barley offered more focus, reminiscent of the sweetness and depth found in the Jiangsu fried eel that inspired this dish, but I wished the ginger foam made more of a statement. 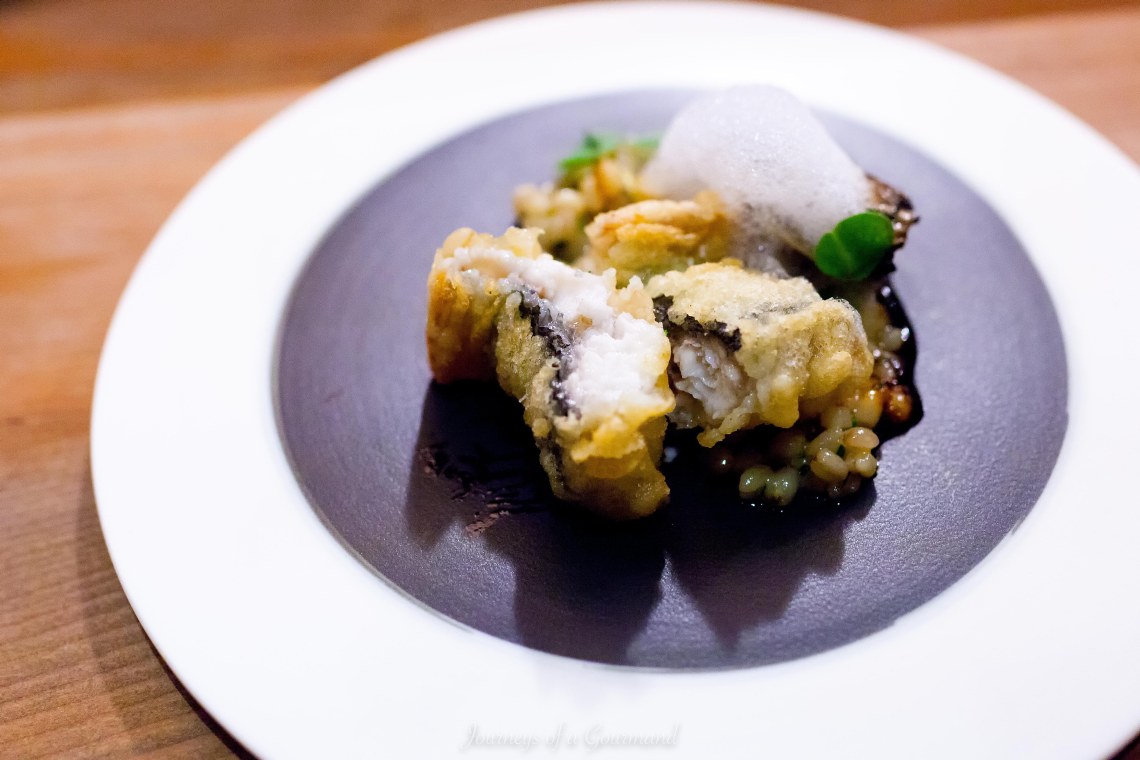 With all the fusion going on throughout the evening, desserts were refreshingly uncomplicated. The orange blossom panna cotta, accompanied by orange sorbet and a blood orange sauce, tasted of sweetness and sunlight, the variations of orange nuanced and elegant. A beautiful slice of opera cake sprayed with Chinese Shui Jin Fang baijiu was a fitting end to the meal. 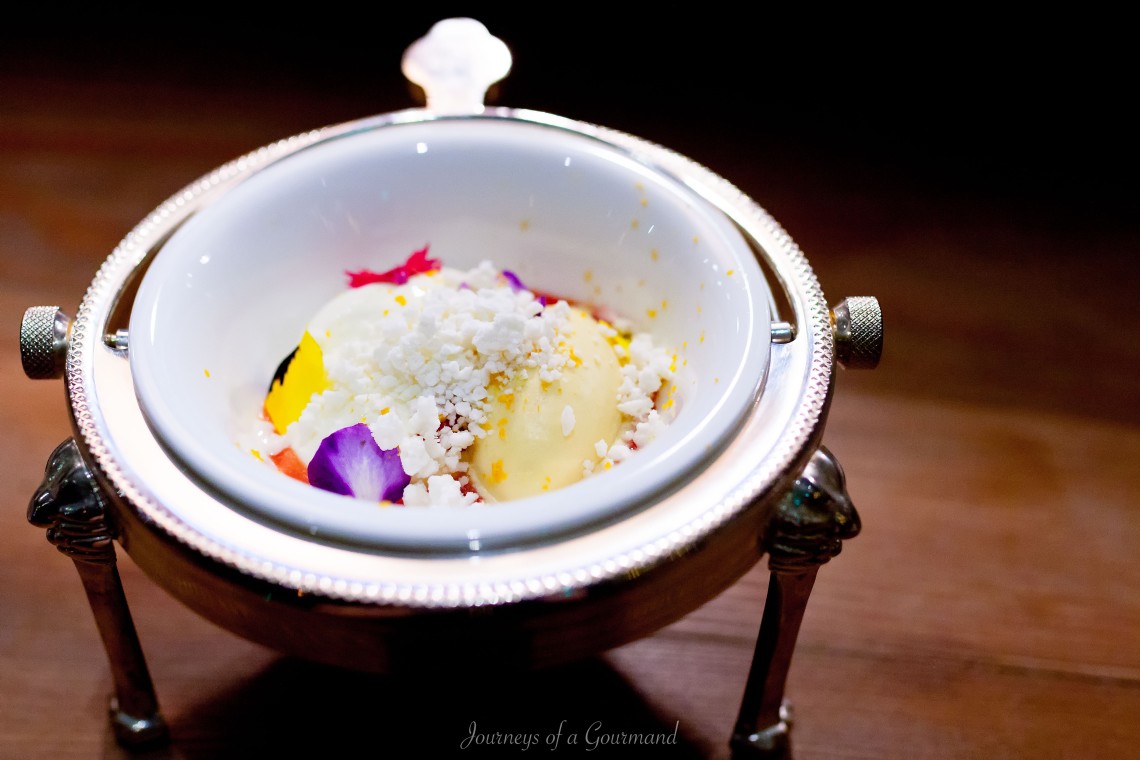 The kind of cooking taking place at Bo Shanghai calls to mind similar endeavors by Japanese chefs, who have become such experts at integrating global cuisines with their heritage that Japanese-French and Japanese-Italian have become cuisines in their own right. While Bo Shanghai could benefit from more focus in their cooking every now and then, it already displays enough perceptiveness and acumen to make it an unequivocal forebear in imbuing global influences into our understanding of Chinese cuisine. 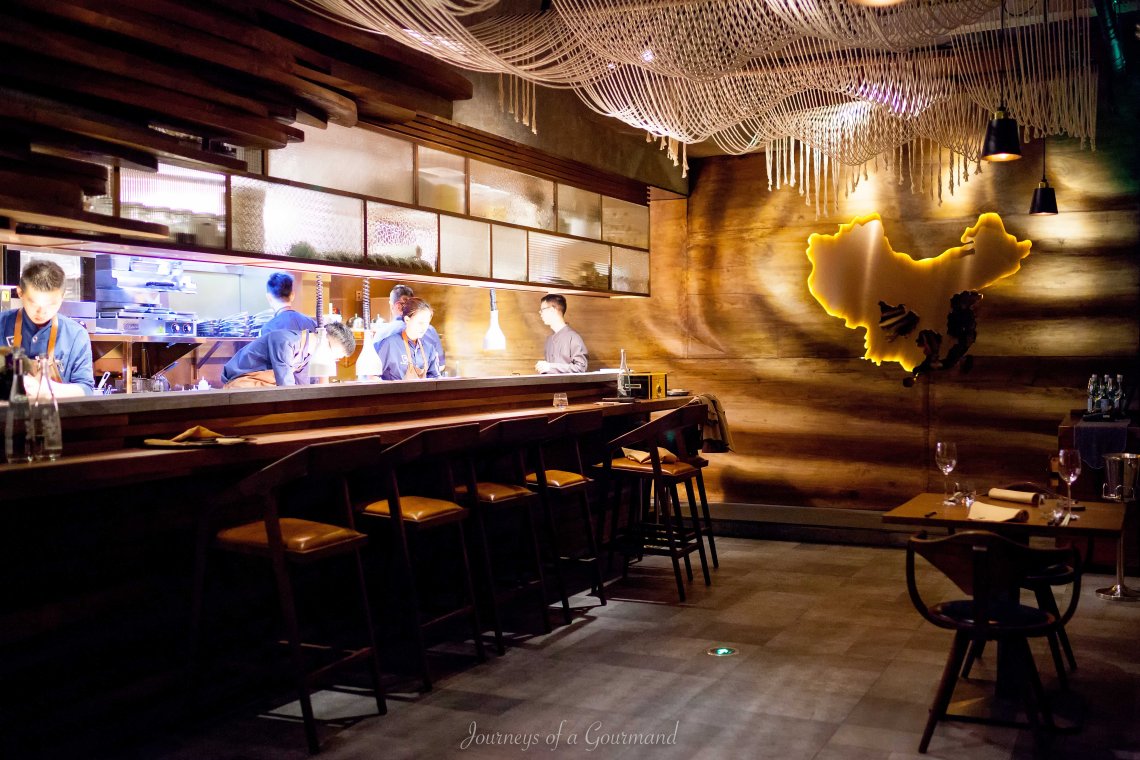