An interview with Stefan Stiller and Jeno Racz at Taian Table, Shanghai

When Stefan Stiller put up a post on LinkedIn two years ago, looking for a chef-de-cuisine for his new restaurant project in Shanghai, and Jeno Racz replied, wanting to join, neither of them could have anticipated that 18 months later, said restaurant would be where it is today. Located at a quiet, secluded address that is only disclosed upon reservation, Taian Table is one of Shanghai’s hottest restaurant openings last year, with a Michelin star under its belt less than 6 months after it served up its first dish.

As the restaurant comes upon its tenth menu next week, I spoke with Stefan and Jeno about what the restaurant means to them, their journey over the past year, and their views on Shanghai’s dining scene. 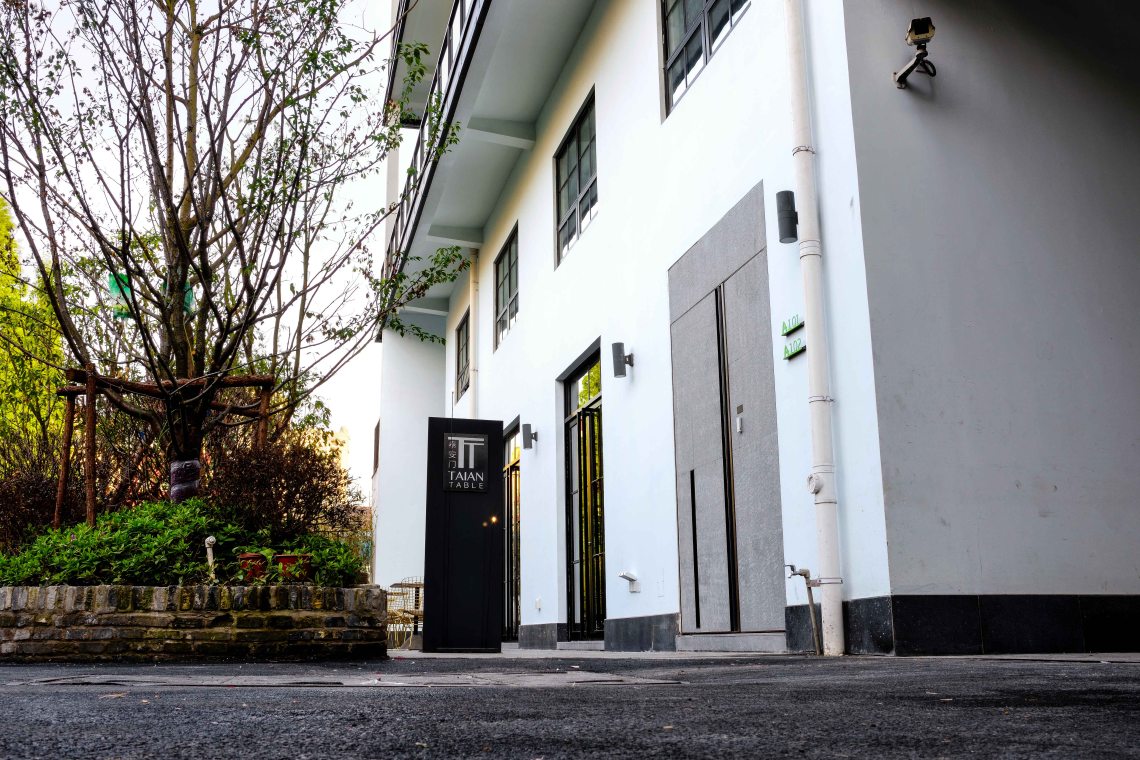 Is there an identity or characteristic that defines Taian Table’s style of cooking?

Stefan Stiller: We’re still a work in progress. Taian Table is only about a year old, so I think it’s almost too early to say “style”.

And in fact, I don’t really like putting our food into a box. Some of our dishes are very innovative; some are based on very traditional recipes, but with a modern touch. So it isn’t easy to put it all in a box and say, “We do French-oriented,” or “We do avant-garde.”

Jeno Racz: We’re certainly building our own style, but we don’t want to put ourselves in this kind of constraint.

So what is it about Taian Table that draws guests back again and again? What’s the appeal?

Jeno: Well, good food, of course, but there are a lot of other places cooking very good food. Food is the heart of a restaurant. Everything else is the soul.

Stefan: Yes, good food is certainly the core of a restaurant, but there also has to be personality behind the food.

“Food is the heart of a restaurant. Everything else is the soul.”

Jeno: It’s also important that we entertain people, that guests enjoy the experience. Still, taste is always our top priority. If something doesn’t taste good, then there’s no use, no matter how pretty it looks or how nice the ambiance is.

When guests taste your food, what kind of reaction do you hope to see?

Stefan: It depends. Some dishes are meant to be instant pleasers, like the lobster, white asparagus, and caviar dish on the current menu. Other dishes may be challenging for some guests because the flavors are unfamiliar, so it’s a discovery as they go through the dish. For example, the pigeon on the menu now is served very red, because a pigeon has to be red, otherwise the texture and flavor are just not the same. But a lot of guests here aren’t comfortable with very red poultry – you can see it in their expressions when the dish is served.

Jeno: And you should see their faces when we explain that the sauce is made of the pigeon’s heart, liver, and lungs. Many guests don’t usually eat offal, so they’d pick up just a tiny bit of sauce with the tip of the knife and test it, and then they say, “This is very nice.”

“Sometimes you need to take a risk and say, ‘Let’s see how this goes.'”

Stefan: And later, the plate is empty, it’s cleared! So sometimes we need to take this kind of risk and say, “Ok, this might be challenging for the local palette, but let’s give it a try and see how it goes.” We don’t want to always go the same way and play the same flavors.

Stefan: Exactly! And then I’d get bored to death, so I’d open ten more restaurants. 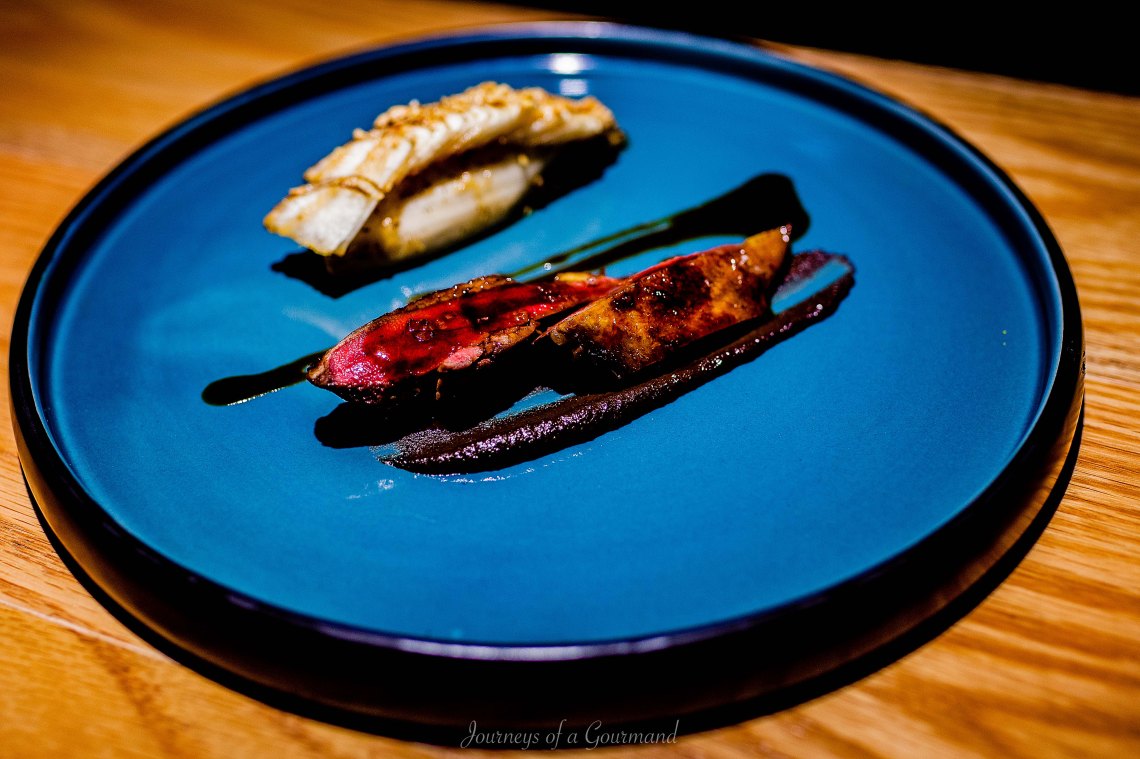 I guess that’s why you change your menu completely every five weeks or so. That’s practically unheard of. What is the process like?

Stefan: It was tougher in the beginning since we didn’t know each other that well, but now I think we have a good way of working things over. Jeno is like a creative engine, pouring out a lot of ideas. We’d test these ideas, and we’d have a very straightforward and honest discussion. If we find that the harmony or the pairing isn’t right, then we’d work on it until it comes together.

Jeno: And it’s actually a very organic process to refine a dish. You can’t plan everything ahead of time. We can pick a way to cook an ingredient, or something to pair it with, and realize it’s a wrong one. And then, sometimes completely by accident, we suddenly get to the the right one. So it can be a complicated process.

We’re also always trying to understand the market better. What works in Europe might not work here, so we must adapt accordingly. It’s a constant and endless process of learning.

If you had to name a favorite dish across the past 12 months and 9 menus, what would it be?

Stefan: That’s a hard one. I very much liked the scallop with the barley, yeast, and apple. There were some very bold flavors that came together beautifully with the sweetness of the scallop.

Jeno: There are also dishes that have almost become signatures for us, like the cauliflower dish. We’ve had it on two menus already, and we’d love to bring it back again because we really like it.

Stefan: Yes, that dish had so many layers: the burnt butter hollandaise, the deep-fried dried shrimps, the pickled shimeji mushrooms, the air-dried beef cheek, the smoked egg yolk, some croutons. It’s always interesting when you can have so many different layers come together. 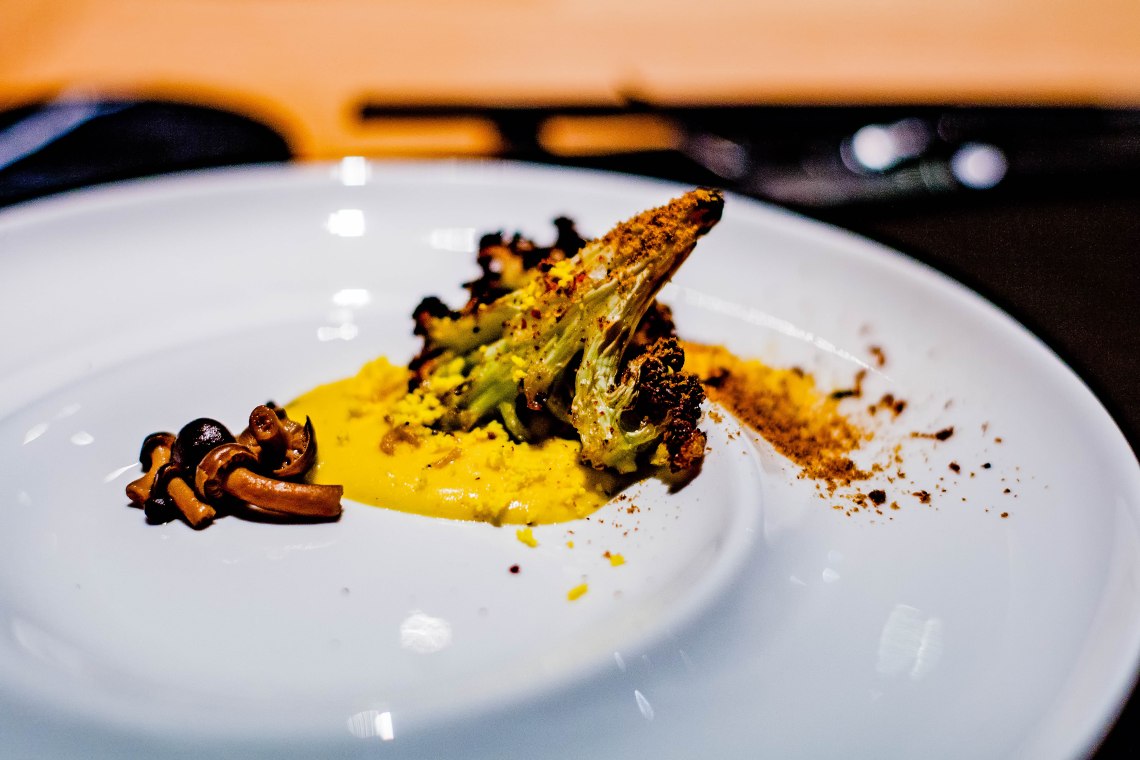 Stefan: It’s difficult to say. I’ve been living in Shanghai for over 14 years now, so I’ve seen how much the dining scene has developed, especially in the last few years.

Jeno: I’ve only been in Shanghai for a year and a half, and I can already see how quickly the food culture here is growing. I like the fact that people here go out to fine dining restaurants just for fun, whereas in Europe people usually go for special occasions only. The market is also much fresher and younger here than in Europe.

Stefan: The image of fine dining in Europe is stiff and formal and not really fun. If you go to a fine dining restaurant in Europe, the average age is probably over sixty. Here, the market is much younger, and people go with a different point of view.

But the market here is not very forgiving. Social media is so powerful here, and there are so many restaurants, so a lot of people don’t really give second chances.

Do you get the feeling that Shanghai’s dining scene – the people, the trends – is moving too fast sometimes?

Stefan: It is very fast-paced. You know, in Germany, where I come from, opening a restaurant is a long-term investment – you do it for 15, 20 years. In Shanghai, there are very few Western restaurants that have survived for so many years. Sometimes, you don’t even know if your place will still be available for lease in 5 years.

Jeno: There’s also a different mindset. In Europe, if you survive on the market for 20 years, you get the crown, so to speak. Here, if you’ve been open for a long time, you’re not exciting anymore.

I think Shanghai’s dining scene can be a sharp and perilous stage. You can do great things here in no time, but it can also swallow you up in a second. 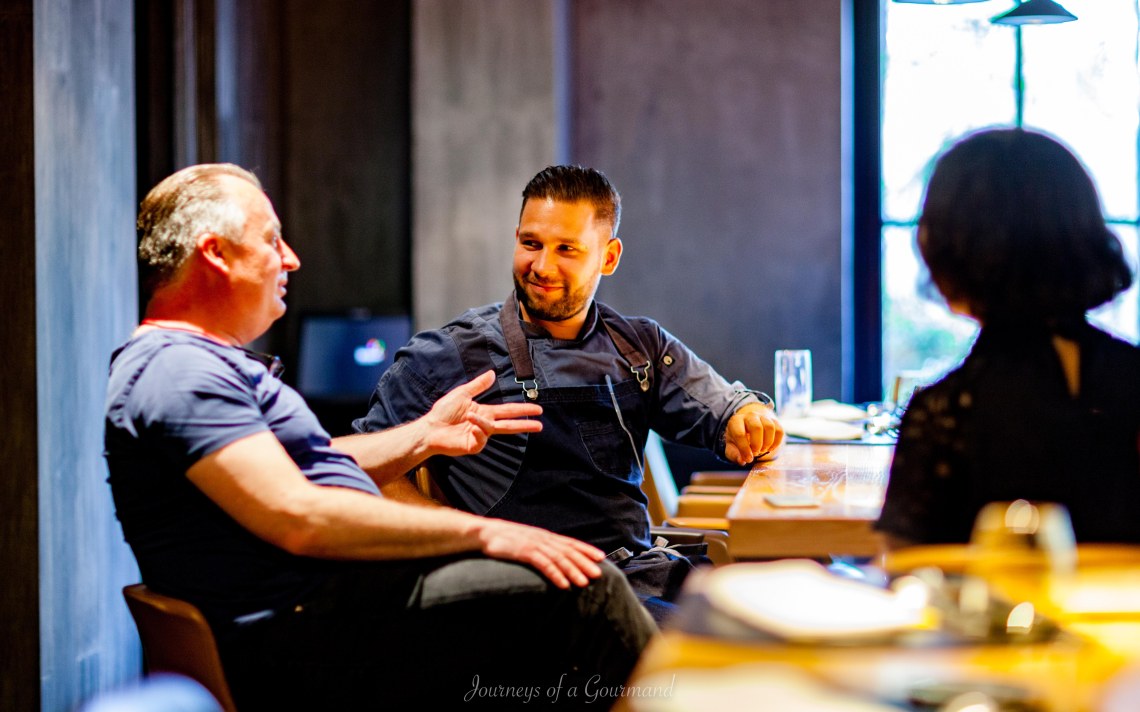 What changes in Shanghai’s dining scene would you like to see the most?

Stefan: I’d be very happy if the government would be a little more open about imported food products. The products available here are very limited compared to Europe or Japan, and high-quality ingredients are even harder to come by, so as chefs, we have to work around that.

Jeno: It’s like you’re an artist, and you want to make the most beautiful and colorful art, but you only get two colors. So we can only do our best with what we can get.

For me, I think a lot of people here are always looking for a “wow” factor, but I wish they would be more appreciative of the effort invested even in something as simple as a baguette or croissant.

I would also be very happy if people could be more understanding of Western food culture when they go to Western restaurants. It’s just like when we foreigners come to Asia and try the food here, I wouldn’t say anything bad just because it’s different, because that’s how people eat here, that’s the culture.

Stefan: I would also like to see more restaurants by individual chefs, places that have a soul, an identity, a personality behind. There are already some restaurants like this in Shanghai, like the Commune Social – Scott and Kim [Melvin]* are there, they care, and they’re putting so much heart into their food. That’s what I like a lot. But there aren’t as many of these restaurants as you’d find in a lot of other countries.
* Executive chef and head pastry chef, respectively, at the Commune Social

What are some of your favorite restaurants in Shanghai?

Stefan: It depends on what I feel like. I go to Mercato for pizza. I eat at various Chinese restaurants. For example, I often have lunch at Ding Tai Fung – it’s good xiaolongbao, and also fast and easy. And of course the Commune Social, which we just talked about.

Jeno: I go to Highline for brunch when I’m in that kind of mood. And when I finish late at the restaurant and I’m starving at 2am, I often go to a crayfish noodle place on Mao Ming Lu, next to Shake, because it’s open 24-hours. 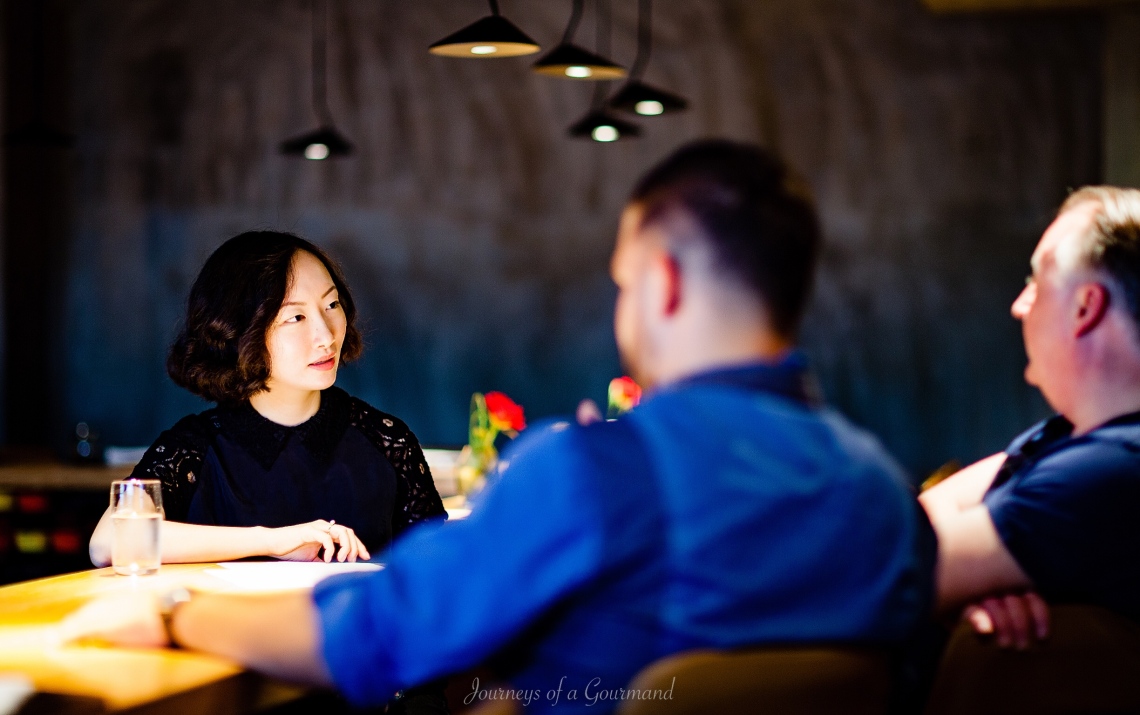