Polux is a café in much the same way that a Porsche is, ostensibly, a car — it does its job exceedingly well, and throws in a little style along the way. 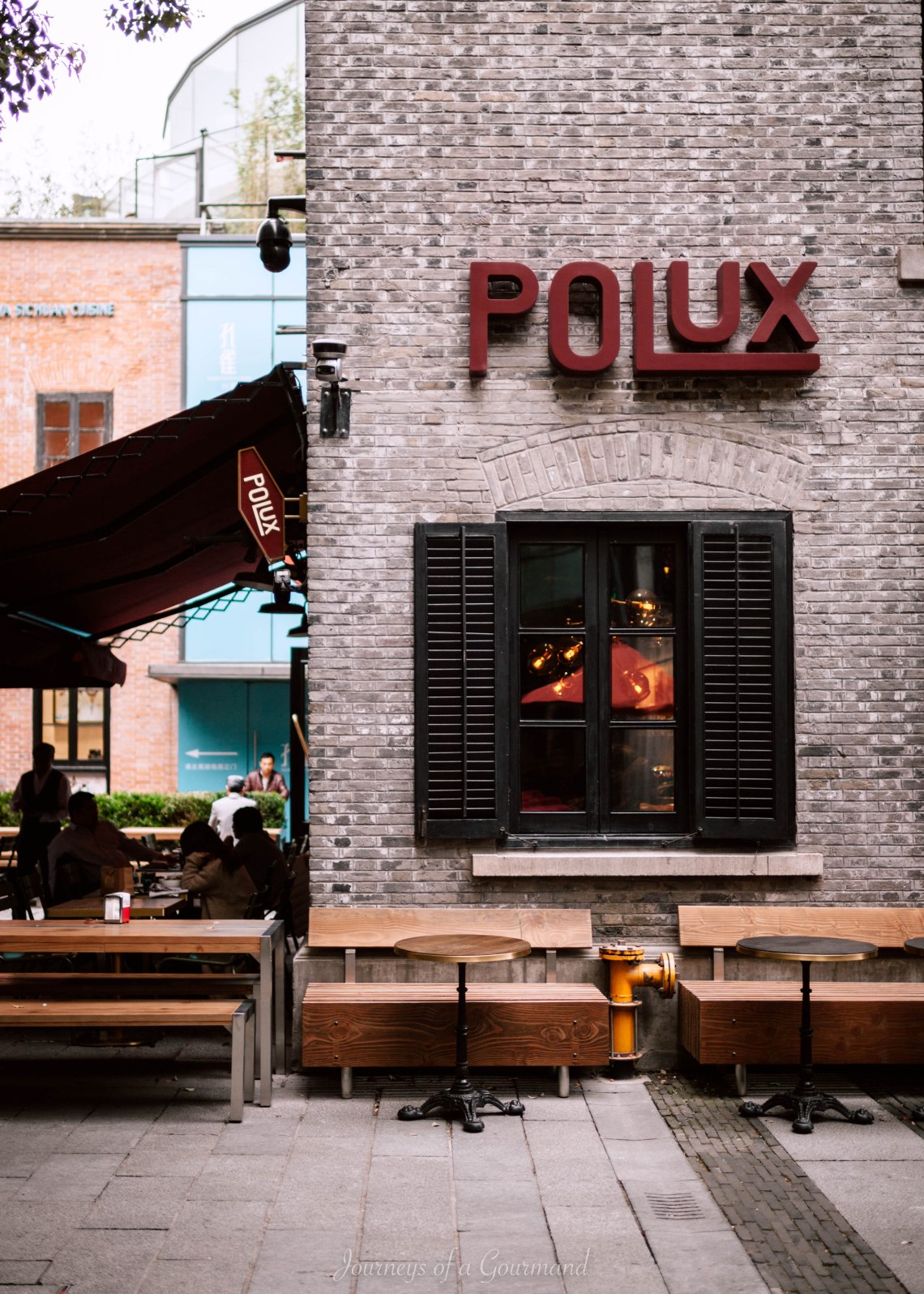 Those who walk into this month-old establishment expecting a culinary spectacle will be disappointed, for the menu offers all the standard fare you would expect of a café, and very little beyond. There is a fiercely charred steak frites, a modest-looking croque monsieur, an equally unassuming crème brûlée… you get the idea. 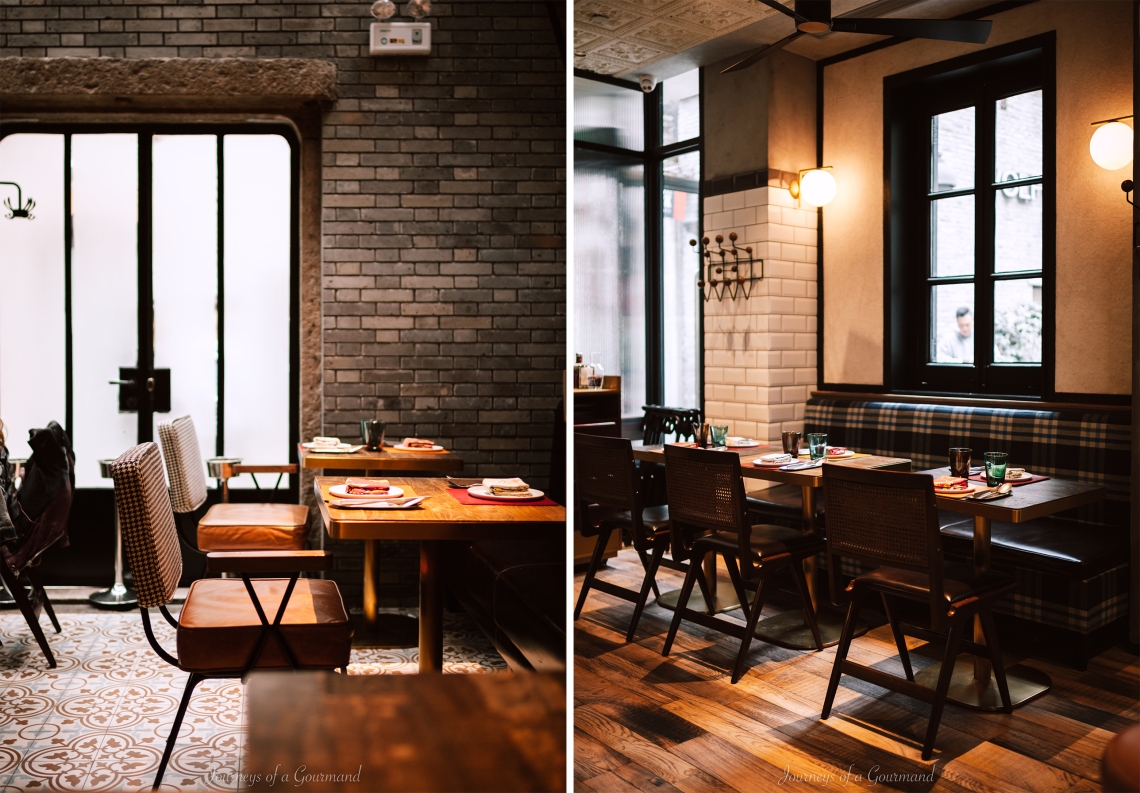 This repertoire might sound somewhat pedestrian for Mr. Paul Pairet, who is probably best known for his accolade-studded, avant-garde restaurant Ultraviolet. But at Polux — which, incidentally, is a French nickname for Paul — these simple things are expressed in a strong typeface and the occasional exclamation point, reminding us all the more emphatically what a formidable team occupies the kitchen.

Look no further than the eggs Benedict and avocado toast (this is Shanghai and Polux is an all-day café). The former — a French rendition in which baguette does the work of English muffin, and does it better — is a wonder of crisp edges and yolk-soaked bread; the hollandaise clings to the smooth egg and translucent ham, just as it should. The avocado toast sees every detail kicked up a notch or ten, unfolding in an intense, magnificent choreography of creamy richness laced with fresh coriander and the sharp zip of lime, a thrumming bolt of black pepper and the dark undertone of well-toasted bread. 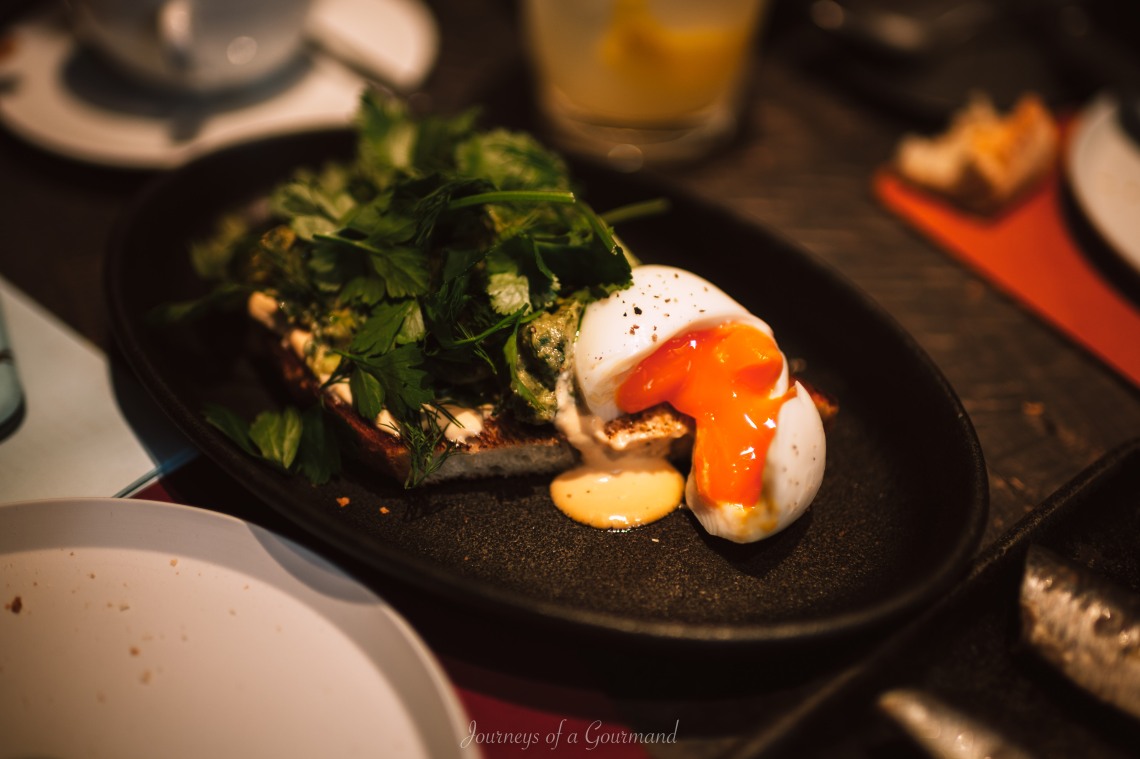 Yes, these are ubiquitous classics found all over Shanghai. And yet, they are perfect in a way that we, somehow, no longer expect; because somewhere along the line, we grew accustomed to the watered-down versions of what these classics could be, and lowered our expectations to match. 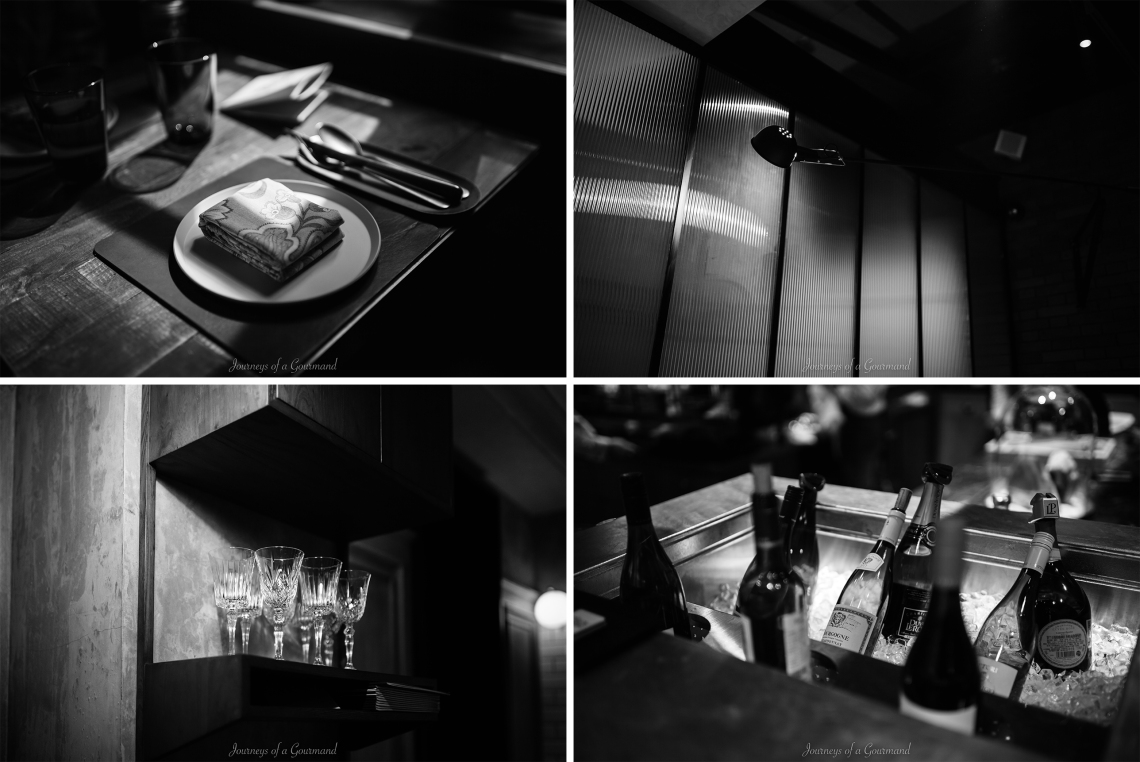 When was the last time you came across a flawless duck confit? Meat glistening and tender, skin fried to a dark crackle, fat rendered just so that it is at once greaseless and luscious, enveloped in a rich, heady perfume? Or a club sandwich that tastes like a small miracle, with its precise layers of succulent chicken, crisp bacon, crunchy lettuce, and tomato so juicy it looks like a treasure trove of sunshine and happiness? Sandwiched between golden buttered toast so crisp it almost defies reason? It is virtually impossible to rave convincingly about a sandwich, but there you go. 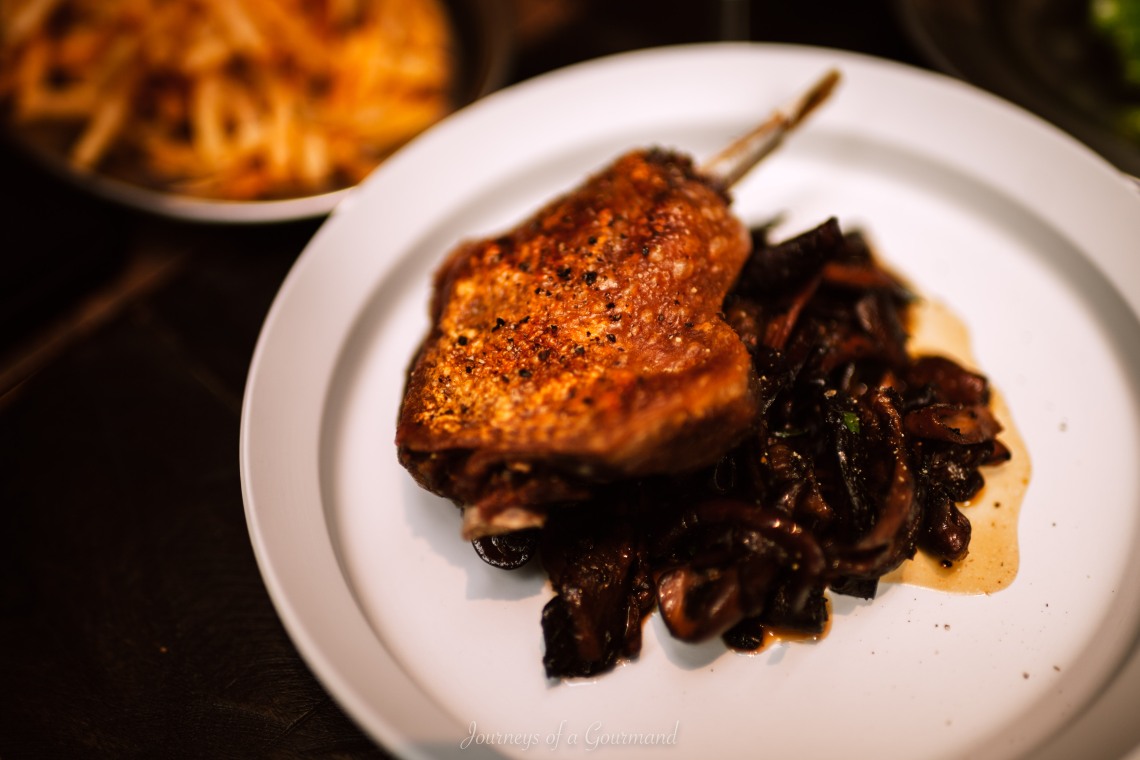 There is also a burger, whose bottom bun is slightly hollowed out to cradle the charred patty embraced in melted cheese, and layered with brittle shards of bacon, fleshy tomato, lettuce, onion, and cornichons. From a chef who spent 12 years cracking the chemical puzzle of the Coca Cola duck, beating a burger bun into submission feels like a minor-key display of obstinacy.

If you didn’t know about this trick of engineering beforehand, you may or may not notice that the burger eats more neatly. That is a recurring theme at Polux. Much of the food tastes endearingly straightforward, even if the ingredients and processes that go into them are probably not, like the beef tartare that has been marinated in beetroot, or the mushrooms cooked down with cream, soy sauce, and sherry vinegar that cascade luxuriously over a slice of crusty bread. 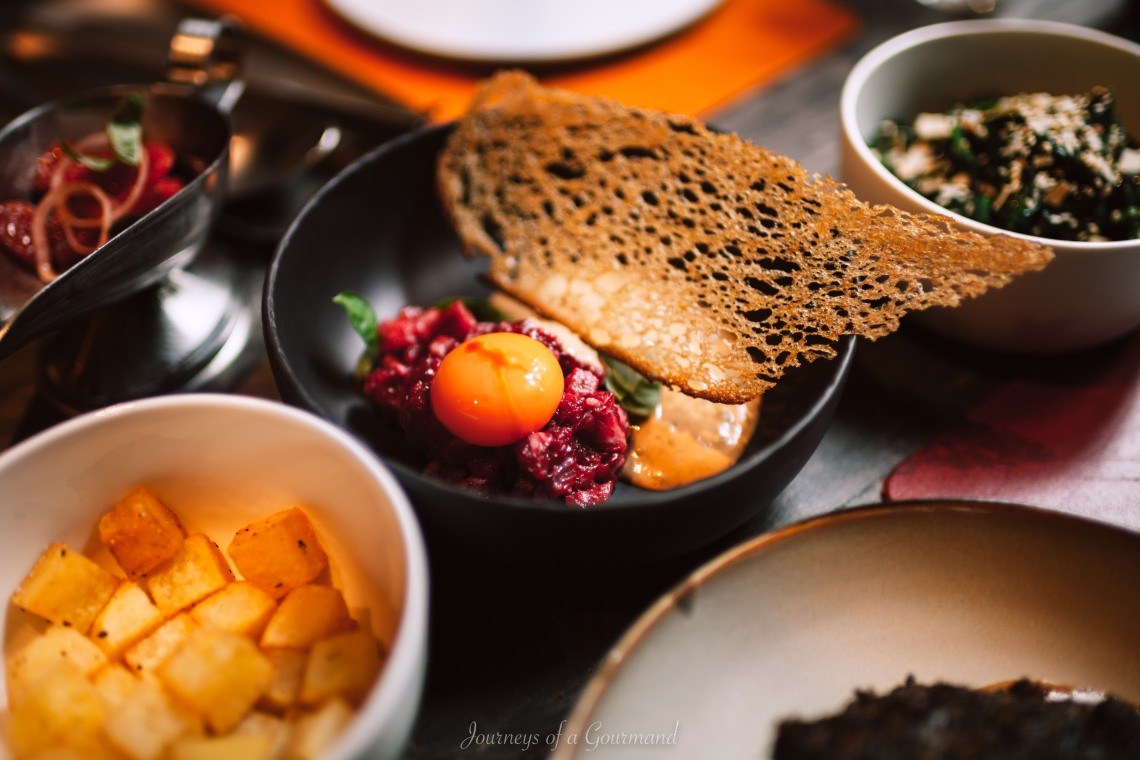 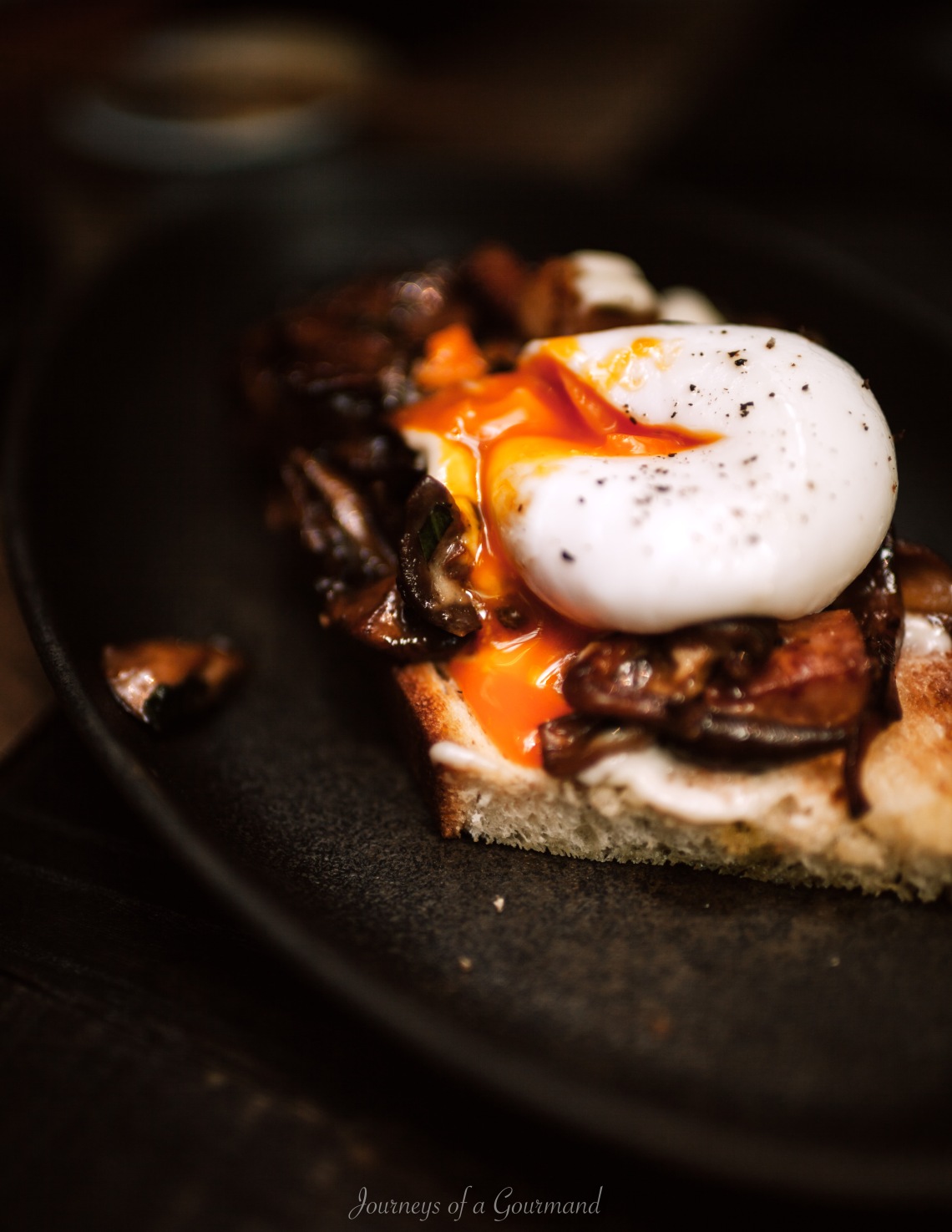 The onion soup, another café mainstay, is darkly fascinating; it is also salty enough to warrant a warning from the servers when you order. But the kitchen has given it enough backbone that it comes across as ardent and robust, rather than over-seasoned. Its smoky, rugged ferocity hits in a wave, a prelude to the wonderfully full-bodied beef broth and sweet, sumptuous onion base. Milling around the murky depths are swirls of wispy cheese and chunks of semi-soggy bread, to act as a pair of comforting ballasts amid raging waters. 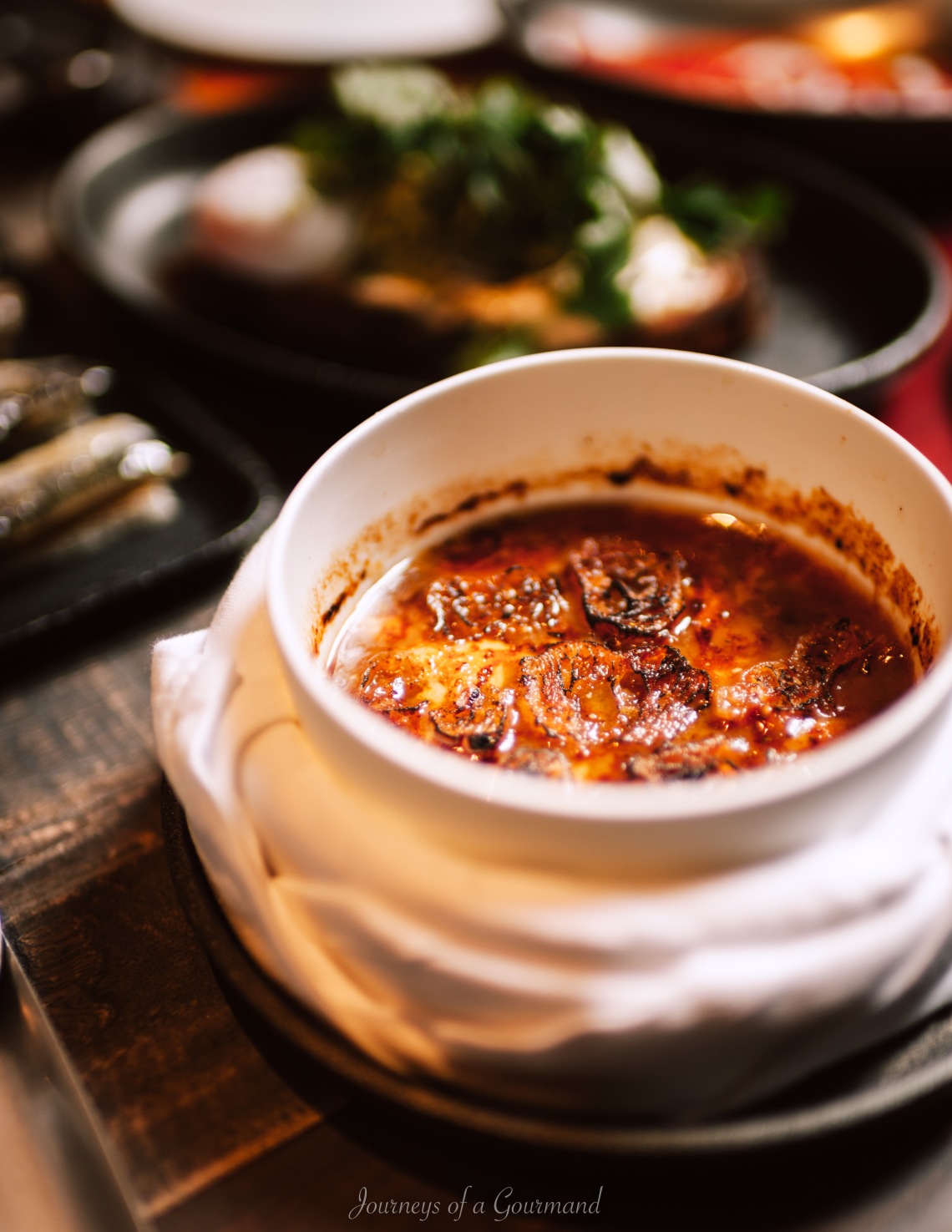 The café sits in a two-story brick house on one of the more secluded blocks in Xintiandi. To enter, you can pick your way through the leisurely cluster of outdoor tables, or go through the main entrance around the corner.

The foyer is wrapped in frosted glass, lending an air of intimacy and mystery. Inside, the space is a kaleidoscope of textures: colonial tiles flanked by washed-out floors, brass lights and unadorned fans hanging from ornate stamped ceilings, wood paneling punctuated with muted bronze shelves, bricks and concrete mellowed by rich velvet drapes. 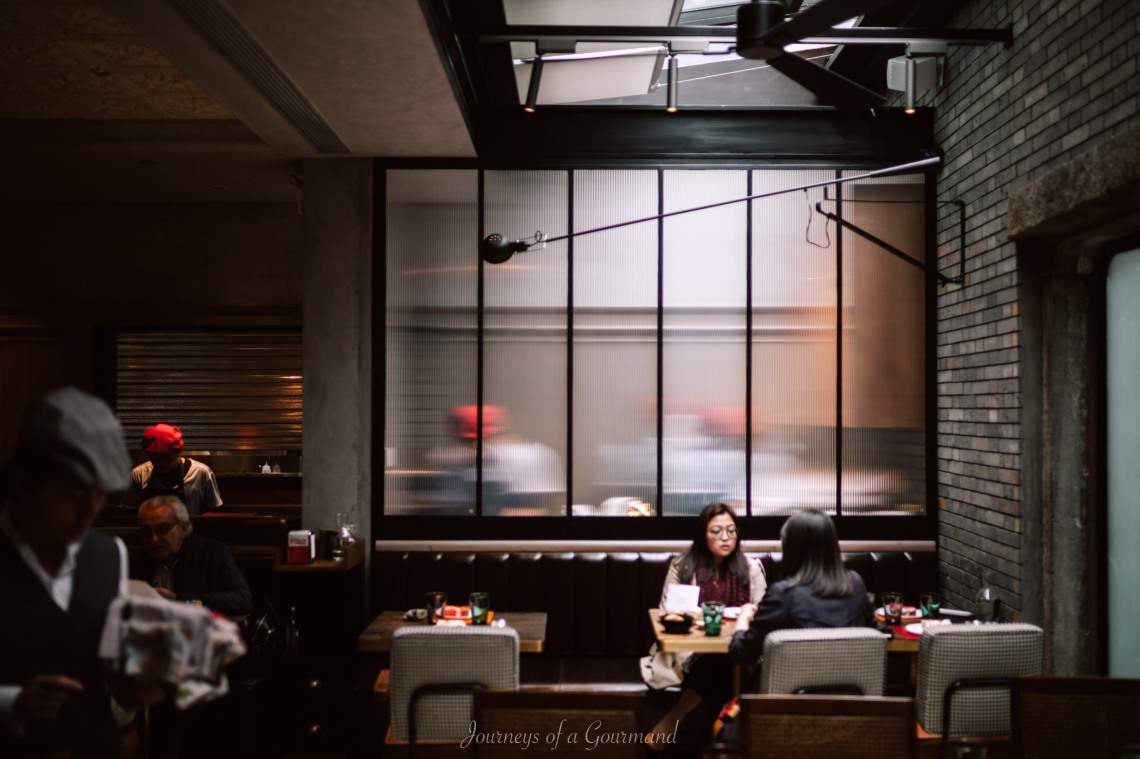 Weaving their way among the tightly placed tables are servers uniformed in French casual chic: washed jeans, white shirts, vests and berets. At times, they can appear flustered, or a little lost; but when they are on solid ground, they display an excellent sense for hospitality. 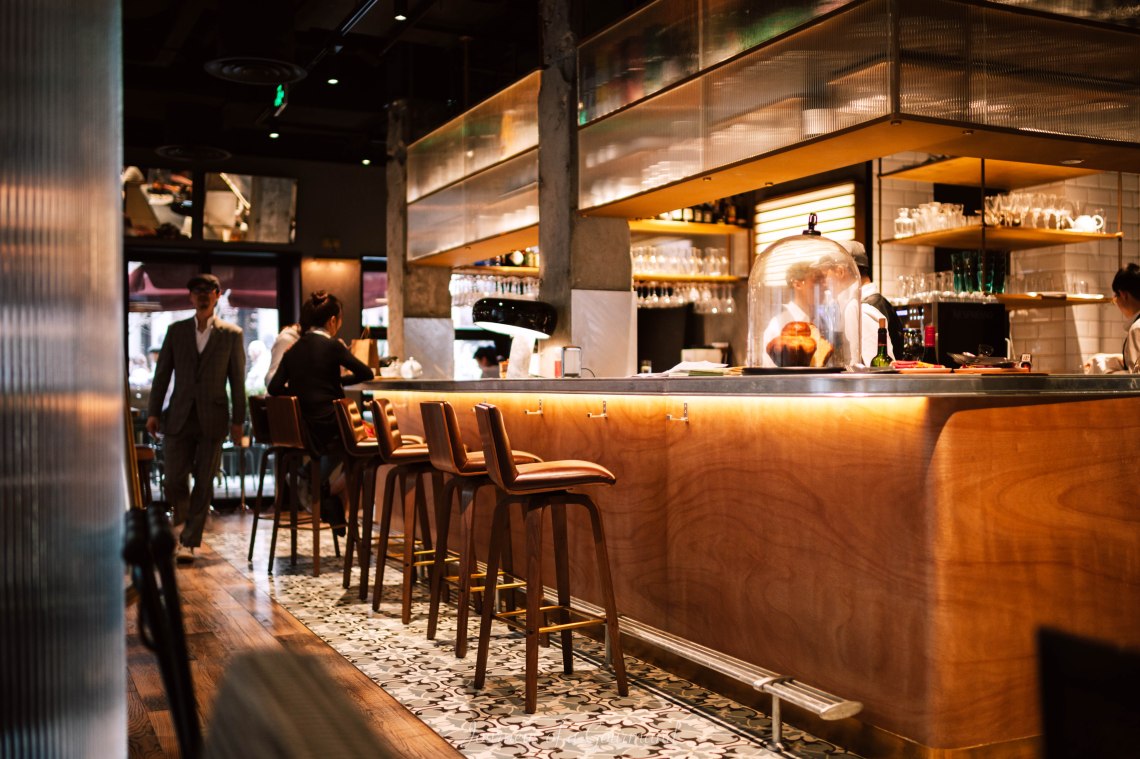 The kitchen can still miss the occasional mark, too. On my first visit, a plate of coquillettes were under-seasoned and slightly greasy; by my friend’s account, this appeared to be an anomaly, but I wasn’t curious enough to give it a second try. Another time, my club sandwich, which was already one of my favorite items at Polux, looked like it was having a bad day, all listless and weepy. The kitchen has yet to work out a consistent supply of potatoes, so the fries, made laboriously by hand every day, are almost constantly different in size and texture — but fortunately, generally likable.

You can draw a clear line from the menu to two of Mr. Pairet’s other restaurants, Mr & Mrs Bund and the much-lamented Chop Chop Club; yet Polux is anchored more firmly within the French comfort food territory. The sharp, bracing sardines on proud toast soldiers, the deceptively simple-looking pork chop, the fork-tender beef cheek with an undercurrent of pepper, the gleaming lengths of bone marrow that find a perfect counterpoint in zesty, vibrant pineapple… These plates are not trying to turn a meal into an occasion, even though many of them are more than worthy.

For a café, the menu rambles on quite a bit, which can be slightly daunting for first-timers. But it doesn’t have to be, once you learn to read the honorific signposts: “the onion soup,” “real double decker club sandwich,” “real French toast” — this sounds like quite the ideal lunch.

Another case in point: “egg mimosa Mama” — it is always a promising sign when chefs name a dish after their mother or grandmother. The punchy, creamy wonder of tuna, mayonnaise, and pickled anchovies is held in thrilling check by sweet, jelly-like tomato. This is one of two things, along with the onion soup, that I ordered on every visit, four times in two weeks. 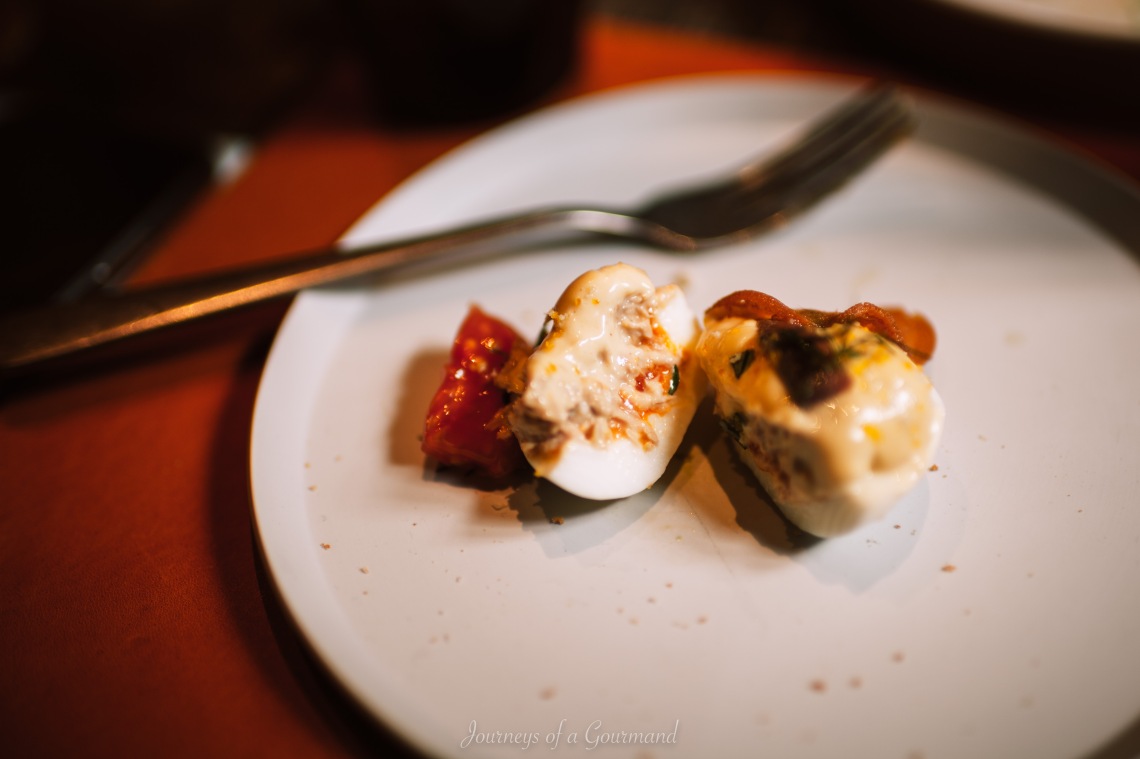 Most of Polux’s food is bold and — I’ll just put this out there — salty enough to make wine sound like an excellent idea. The bottles, predominantly French, are sectioned by price, and I discovered a wonderful house Burgundy on tap when I was there for dinner. 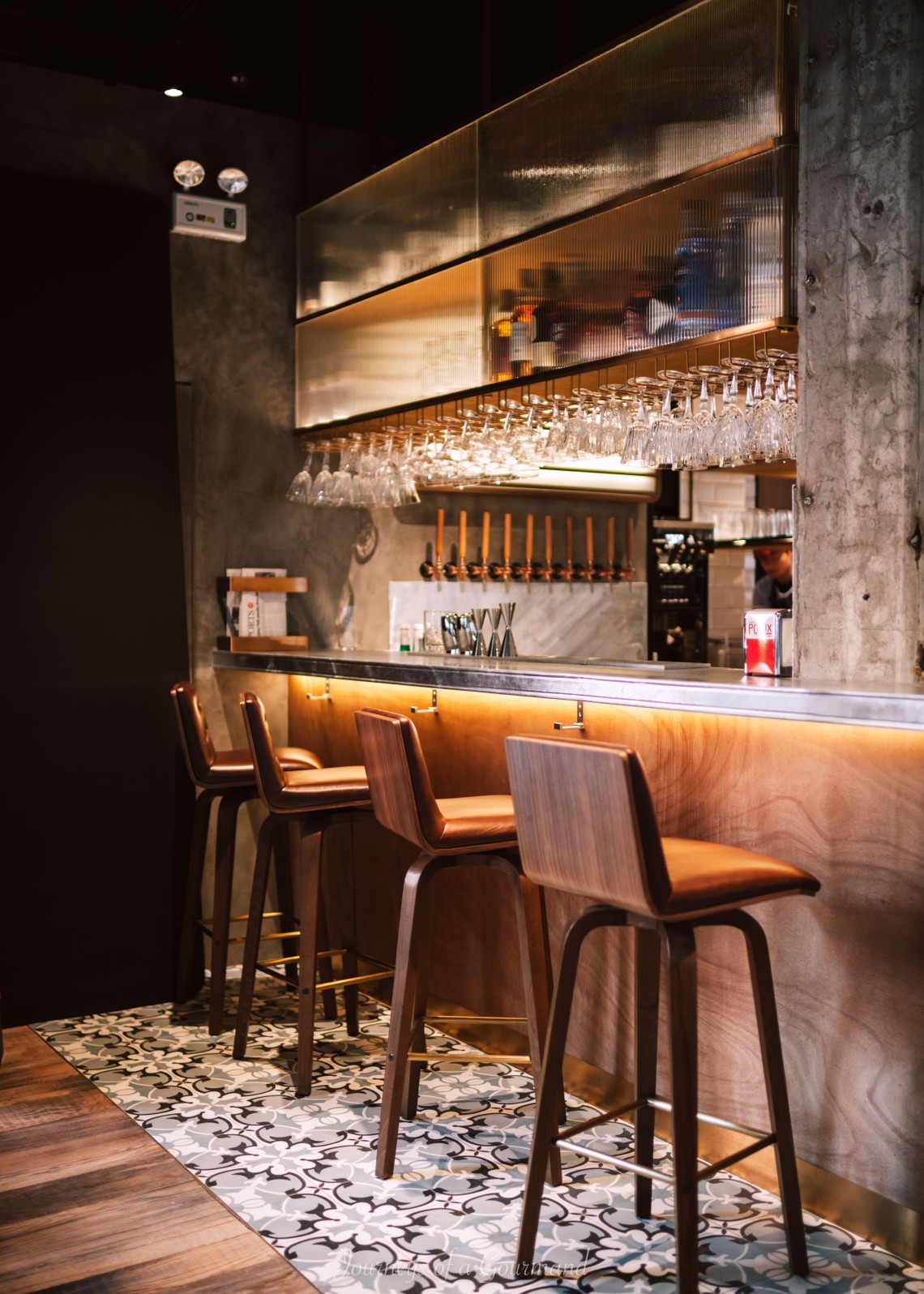 Reservation is another good idea — albeit an unusual one for a café. This is not what the team envisioned when they opened this casual, all-day venue, but a necessary concession to avid crowds. And at the end of the day, this was almost inevitable given that Polux is, as many have put it, a highly accessible concept by one of the city’s most revered chefs. So at the moment, it is best to call ahead and book for much of lunch, brunch, and the first seating of dinner. 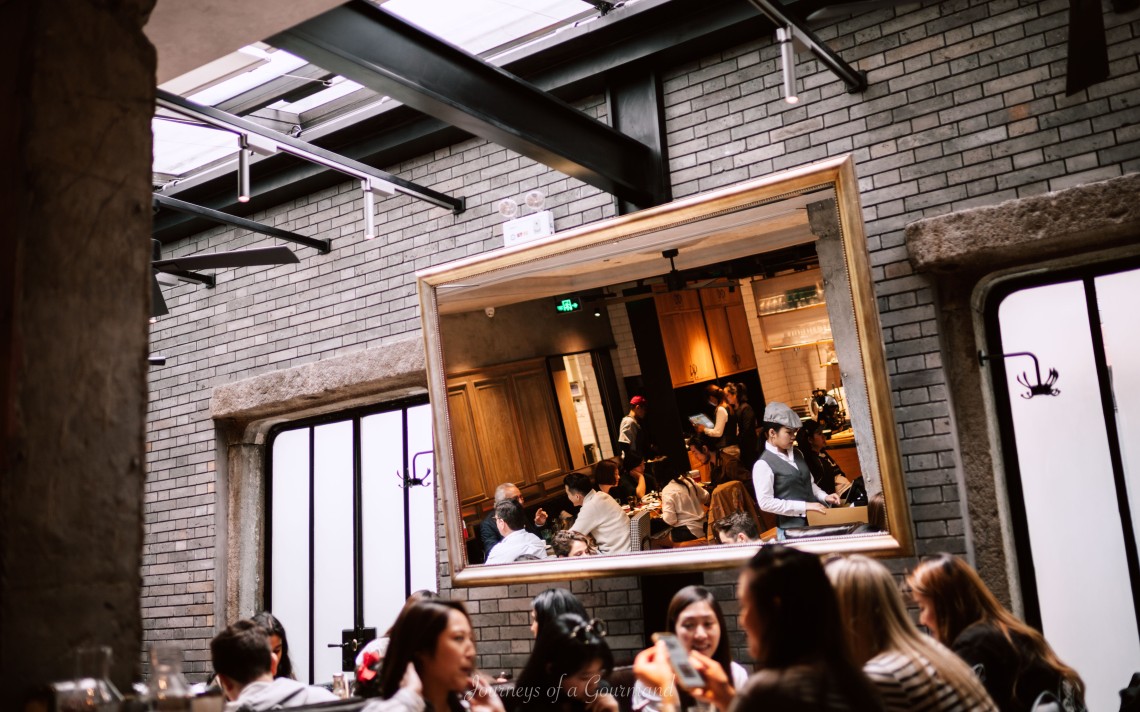 But not for afternoons, which is when you can stroll in, sans reservation, for that club sandwich I was raving about, or for one of their dozen desserts: the rich, custardy real French toast tamed by cool vanilla ice; a rum baba with enough alcoholic tang to keep the sweetness at bay; a chocolate liégeois that rides appealingly between mousse and semifreddo. 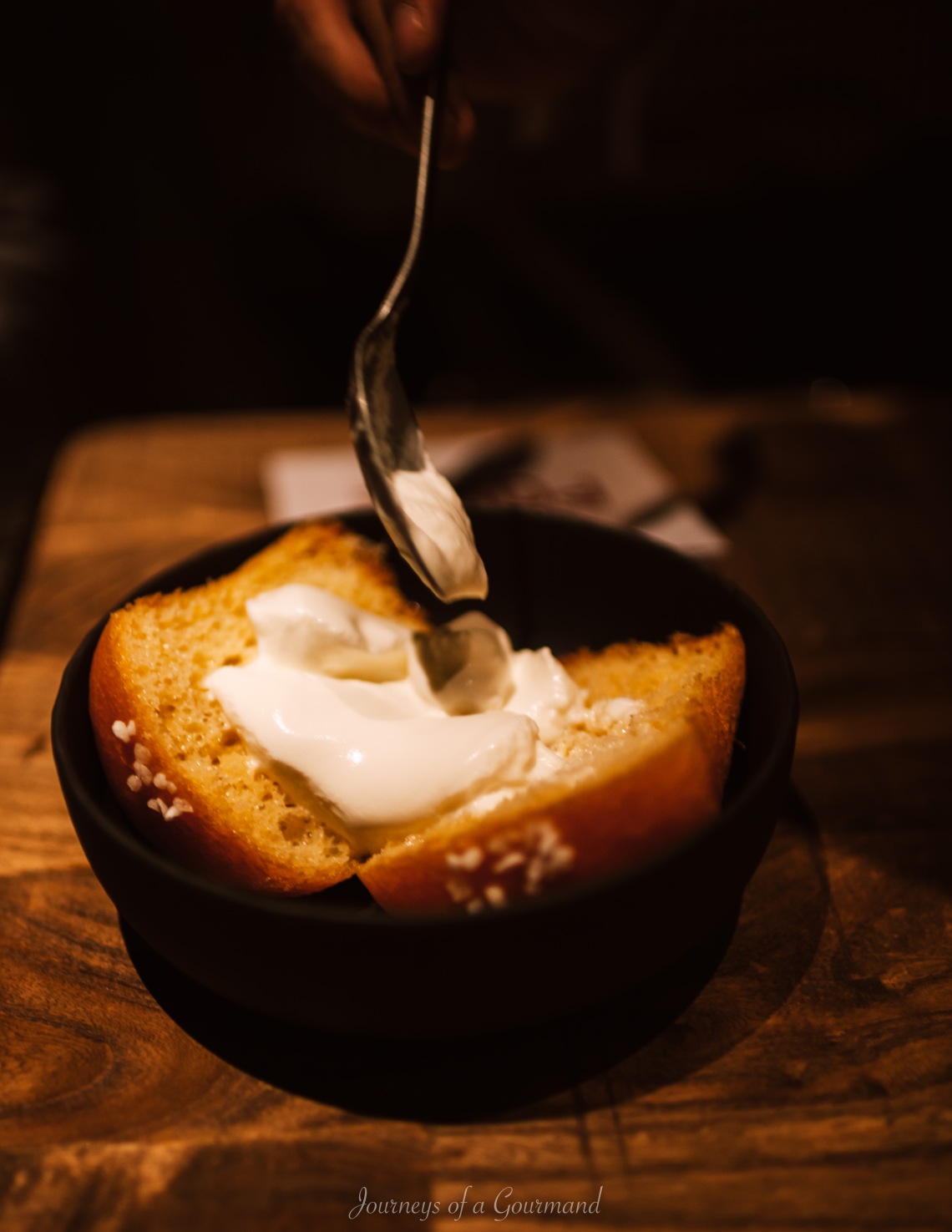 The straightforwardly named “Le Gatô,” an alumnus from The Chop Chop Club, unfurls in a smooth caress of olive oil tinged with a whisper of orange, brought to life with a citrus glaze and an invigorating yogurt sorbet.

If the feast of Gallic comfort food has left you a little sluggish, there is always the bowl of mango and raspberries, elegantly equipped with a whiff of passion fruit and an undercurrent of Earl Grey. Fruit salad has never tasted so delightfully entrancing. 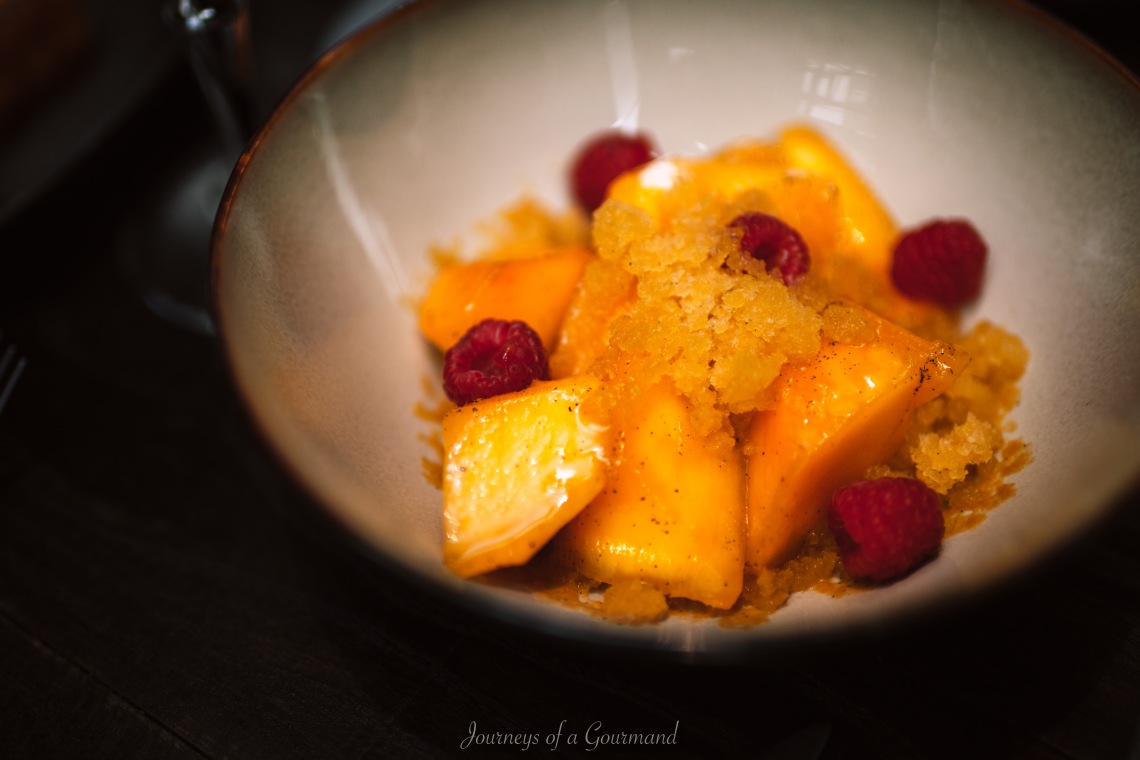 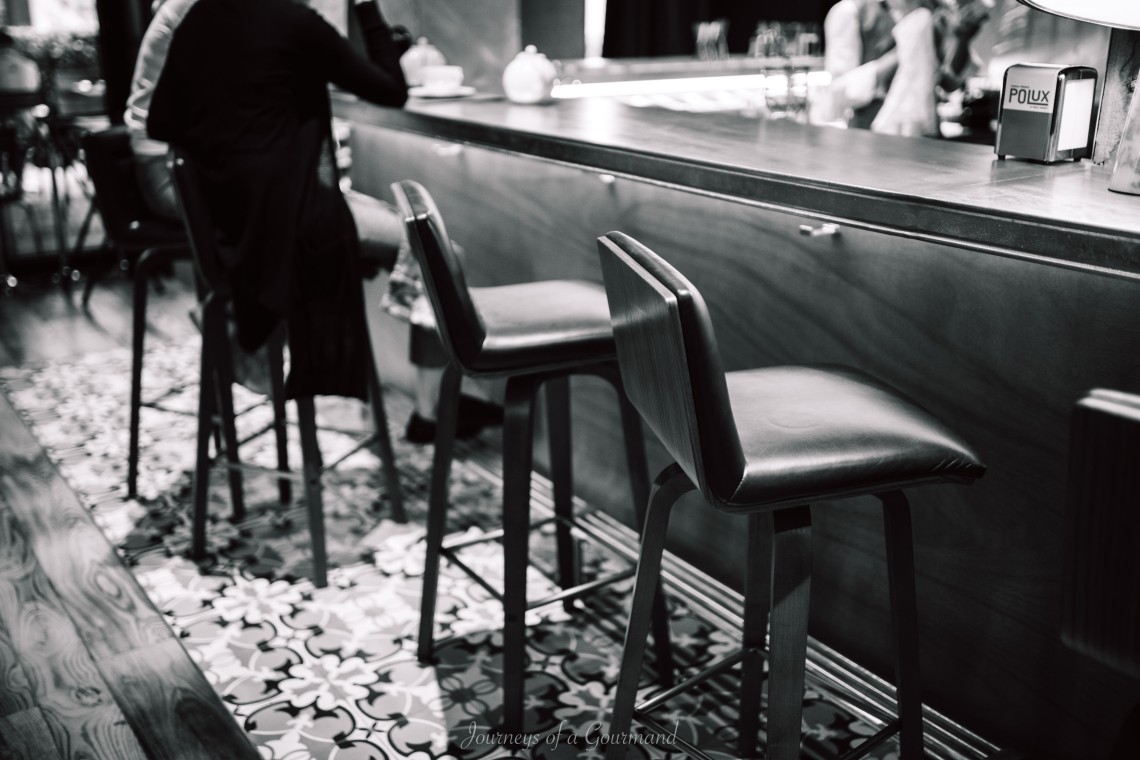