A veteran on the Bund of 10 years, Napa Wine Bar and Kitchen is known not just for their extensive wine cellar, but also for their stellar wine-focused cuisine. Led by Chilean chef Francisco Araya, who took over the kitchen in 2015, Napa uses seasonal ingredients to create elegant and compelling dishes. 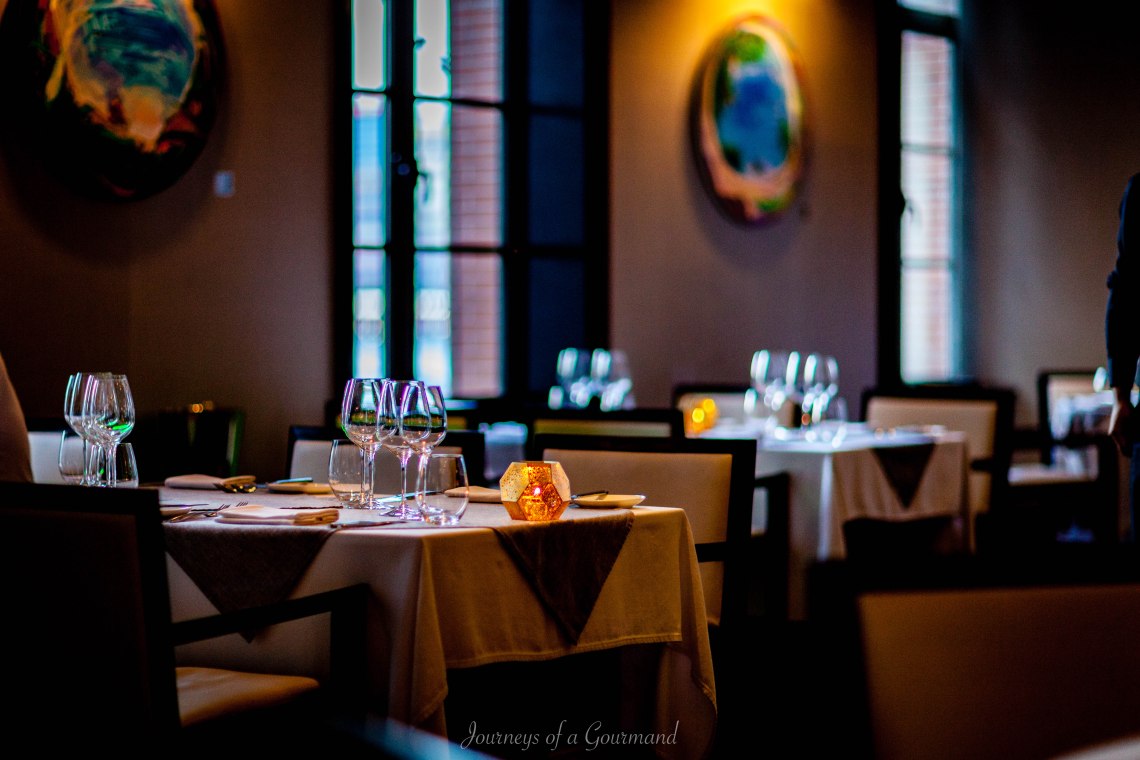 The restaurant, located on the second floor of Bund 22, is spacious yet untheatrical, the pale grey walls broken up by tall arched windows that look out on the river and the lights beyond, and a few abstract paintings scattered in between. The pristine white tablecloths are made warm and comforting with the soft glow of candlelight framed by polyhedral holders of perforated copper. It is the kind of room content with being just the background, like a barely adorned ballet stage that allows the dancers to be the stars. 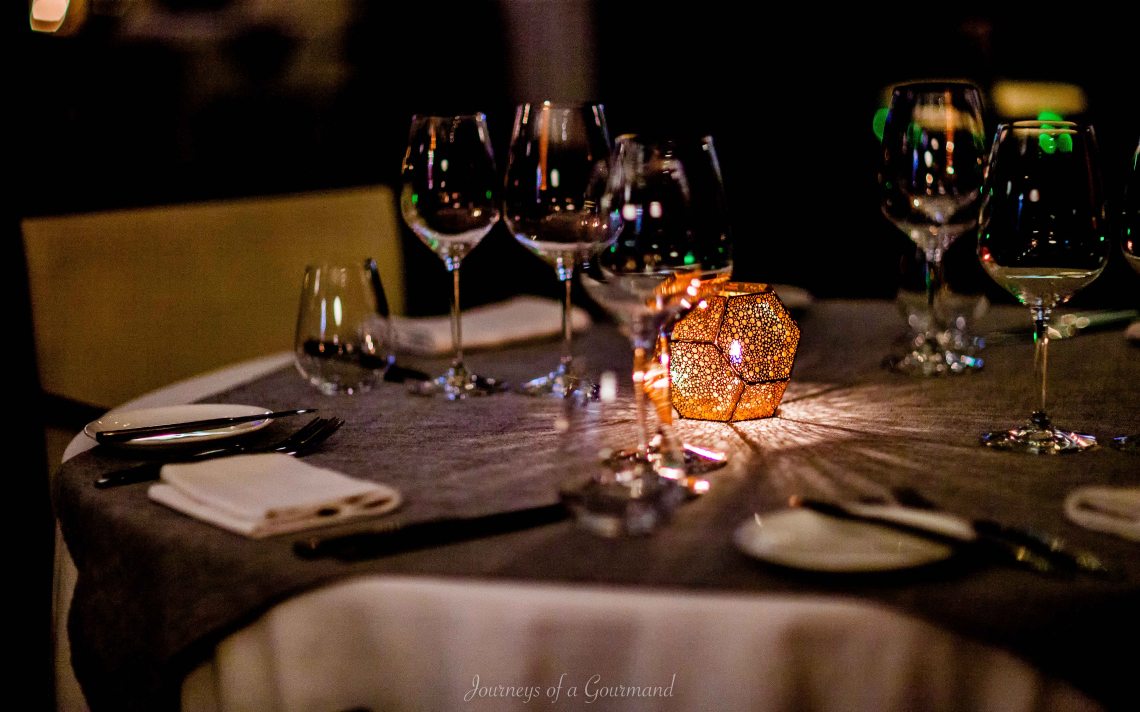 Perhaps in an effort to allow their wines to stand out, Napa’s style of food favors the subtler, more restrained end of the flavor spectrum. But even without the wine, the appeal was hard to miss. My recent dinner came out of the gate singing with two refined amuse-bouches. A thin, delicate layer of chocolate melted the moment it touched my tongue, giving way to an intense wave of foie gras that vanished as swiftly as it came. By its side, a crisp of dried scallop was flecked with porcini-infused mayonnaise, the depth and umami building bit by bit until it lost its question mark. The amount of control and precision contained within these two bites was astounding. 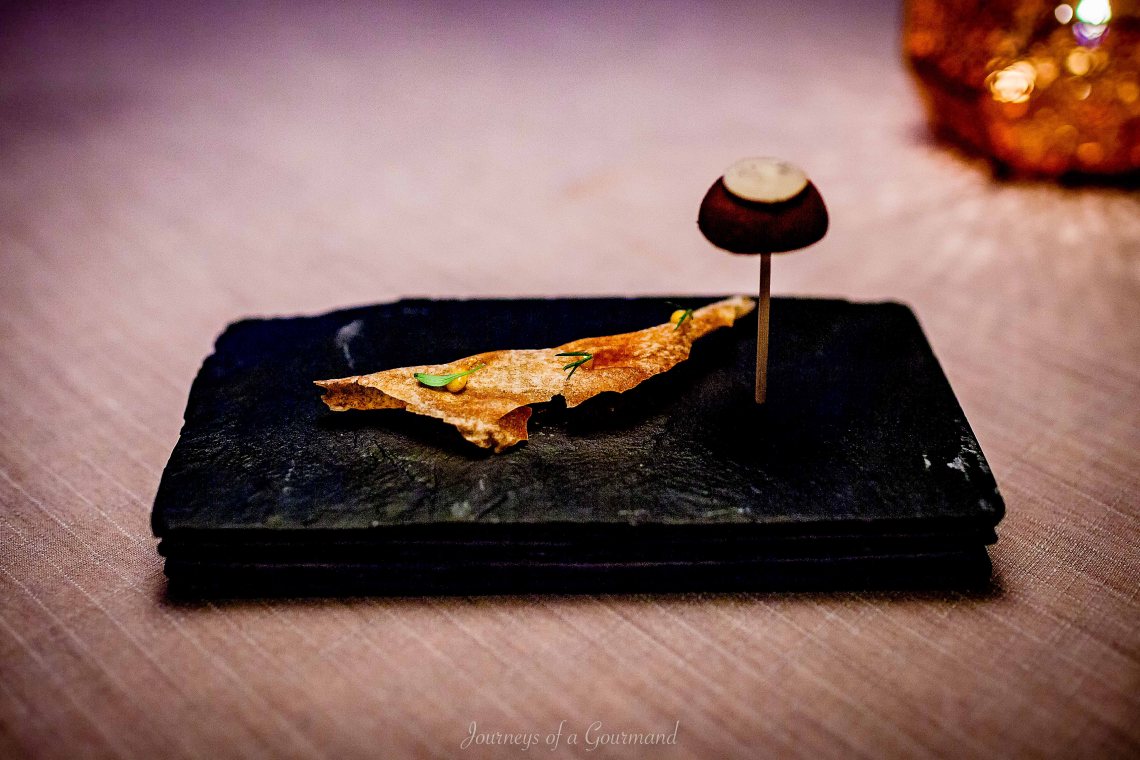 That same restraint was found throughout the menu. Plump, tender slabs of raw scallops were made bright and vivid with a spark of lime, a flicker of chili oil, and a whisper of white wine foam. A few matchsticks of green apple added sweetness and texture. The flavors were lively but didn’t linger on the tongue, leaving behind just a memory of transient pleasure in their wake. A chilled pea soup tasted as green as it looked, though it would have been even easier to love had it been slightly less grainy. Still, I enjoyed the creamy notes from little knobs of ricotta, and the unexpected jolt of sweetness and acidity from some crunchy pickled shallots, giving complexity and dimension to the summery vibrance. 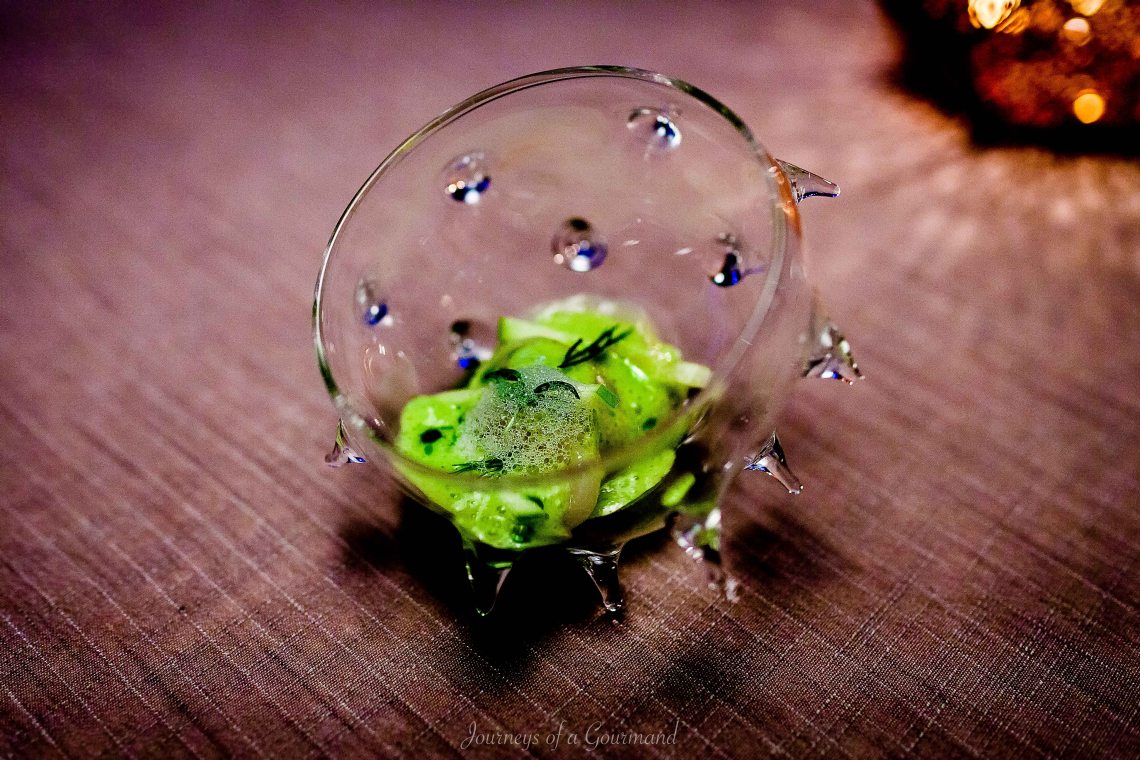 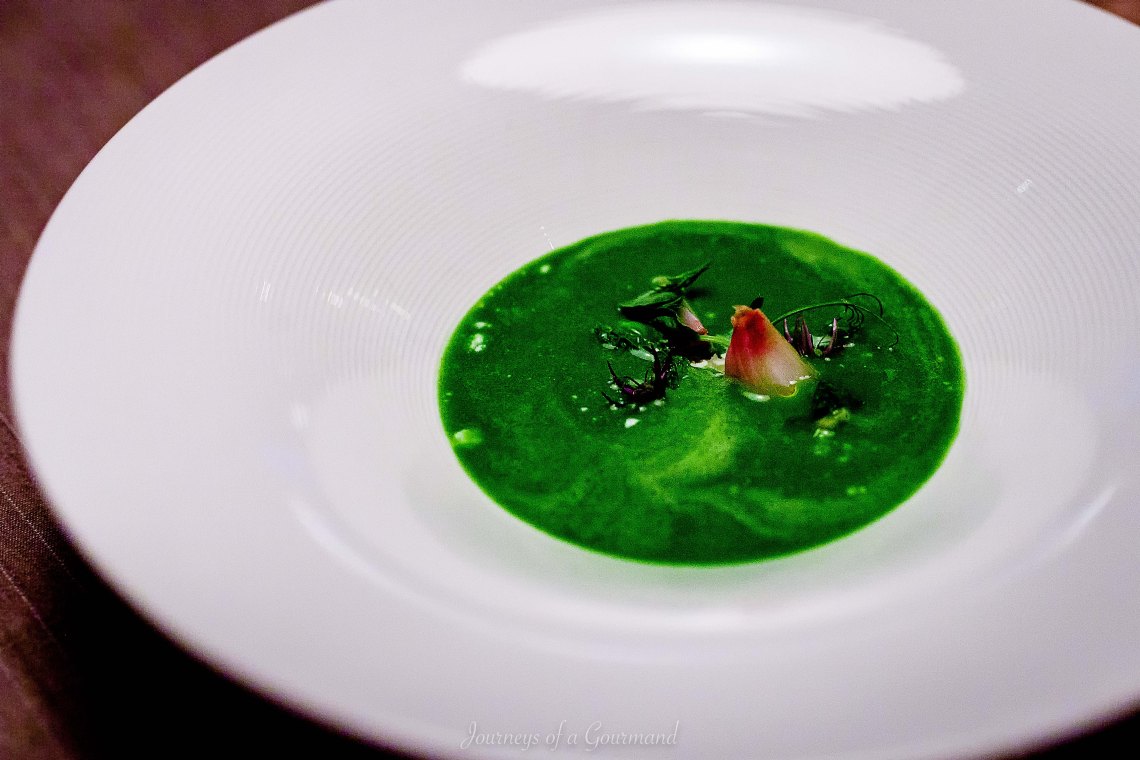 A little off-the-menu surprise from Chef Araya became an unexpected highlight of the evening. The chilled white asparagus soup was refreshingly cold and clean, salty with caviar and crunchy with flecks of fried quinoa. The asparagus’ earthiness built slowly but surely, punctuated by a gentle bitterness from bits of white asparagus scattered in the soup. There were just a few elements, but they echoed and multiplied, flowing and morphing like quicksilver before trailing off into the ether. 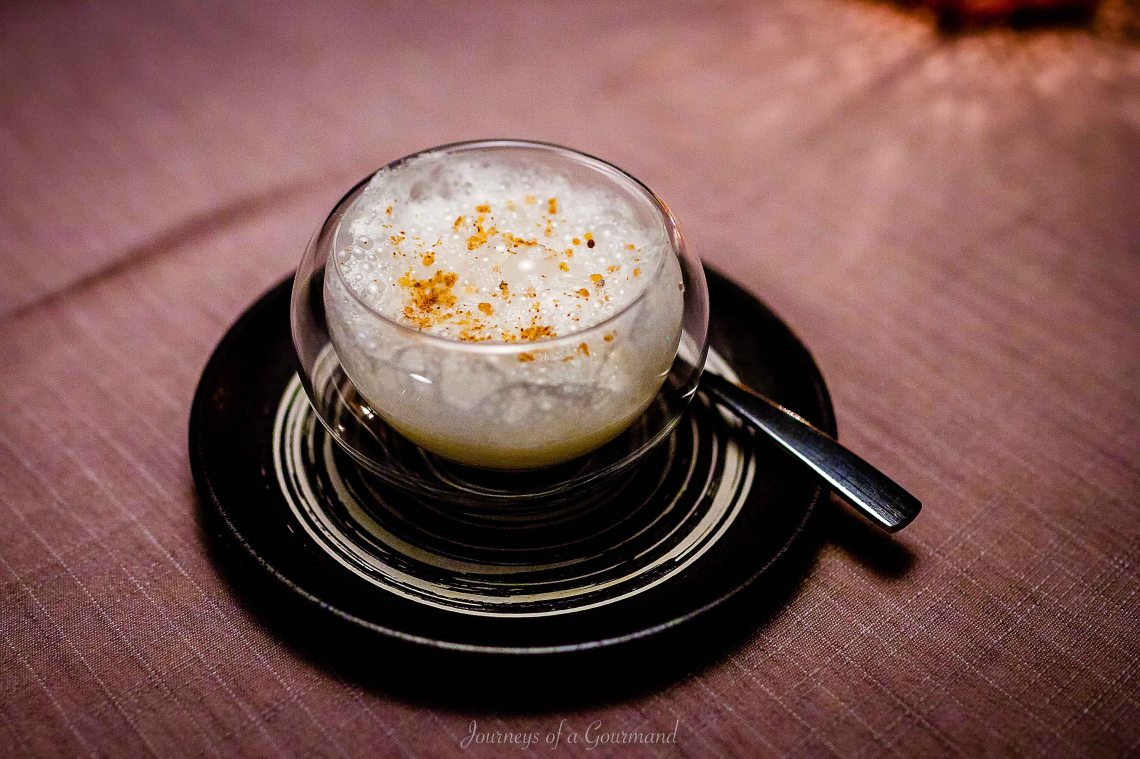 None of these dishes came at me with explosive flavors, yet they all had a kind of lyrical sensibility that took me by surprise. But at times, a few dishes came off as dull and insipid, rather than restrained and poised. A piece of foie gras was expertly seared, retaining just a touch of pink in the center, but it would have taken well to a much more generous measure of accompaniments. With the pear, goji sauce, and balsamic vinaigrette doled out so sparingly, the dish began to feel heavy about halfway through. 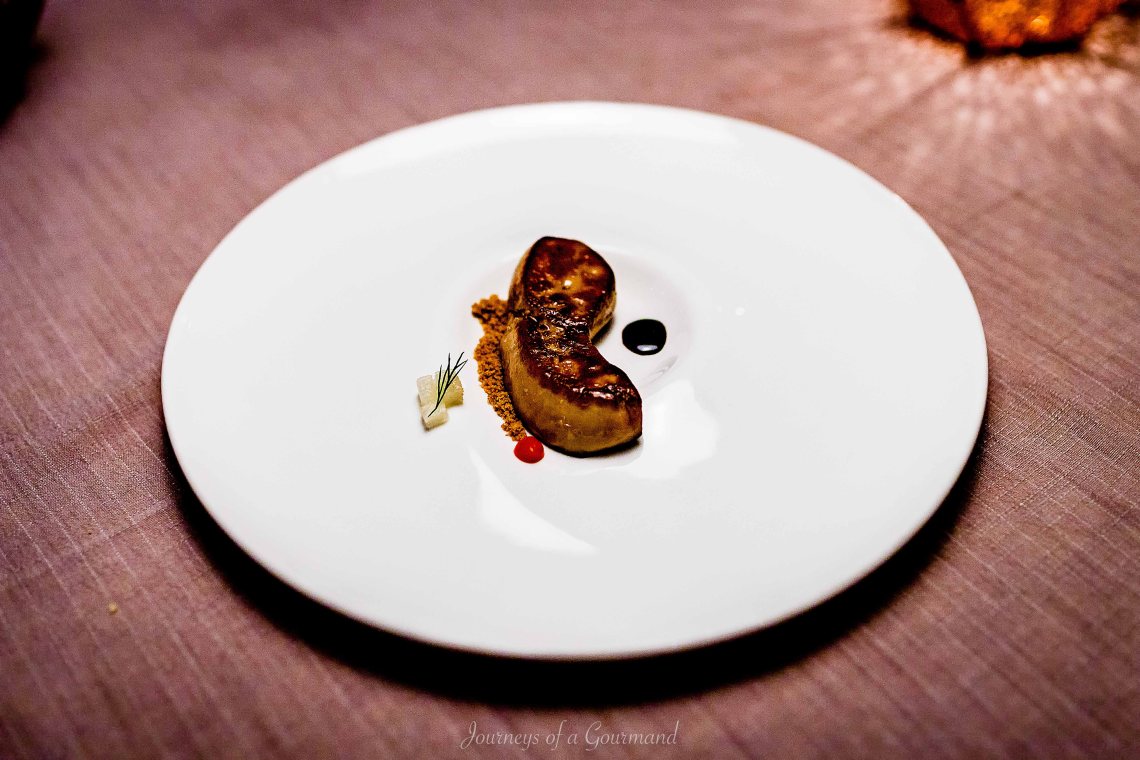 A fillet of pan-seared sea bream was served with two sauces, yet both lacked conviction, making the dish somewhat easy to forget. The kombu-cured Wagyu ribeye that followed was enclosed among swirls of vibrantly-colored piquillo purée and curls of pickled beetroot, but the purée could have been sweeter and the beets more acidic. The plate would have been almost pedestrian without the excellent pairing of Cabernet Sauvignon that delighted with its bright, fruity flavors. None of these glitches were anywhere close to devastating, but they were disappointing because I could imagine exactly how good the dishes could have been. 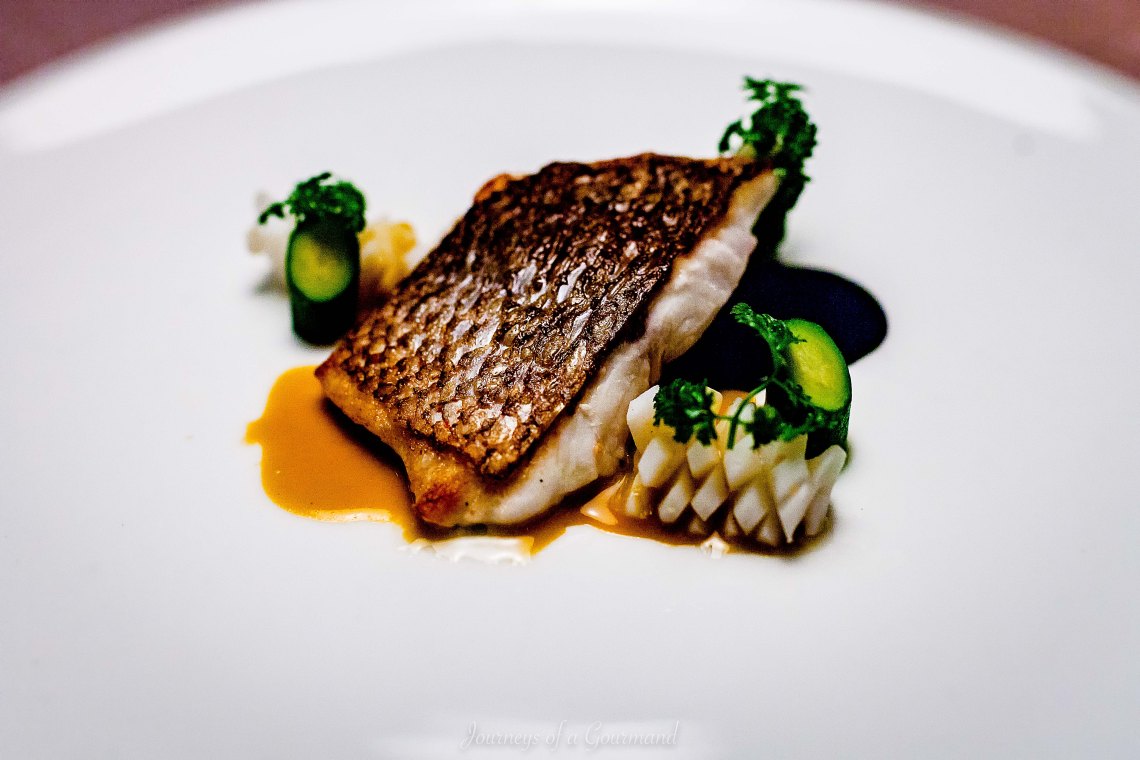 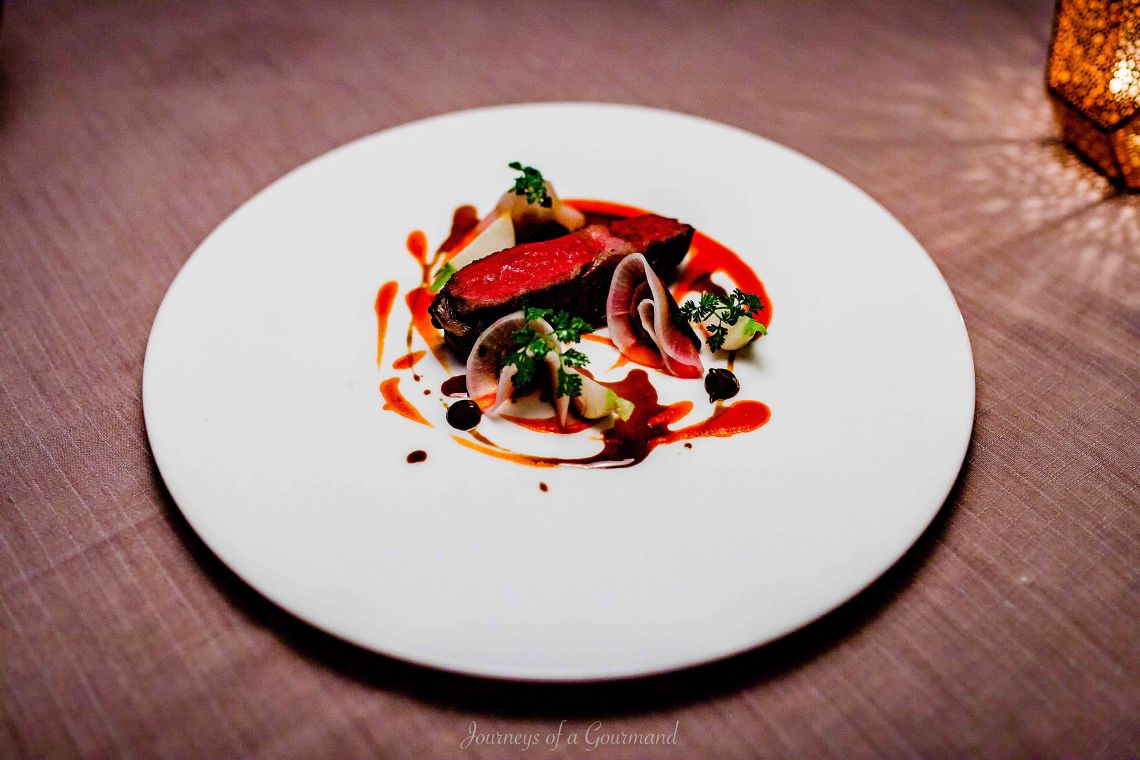 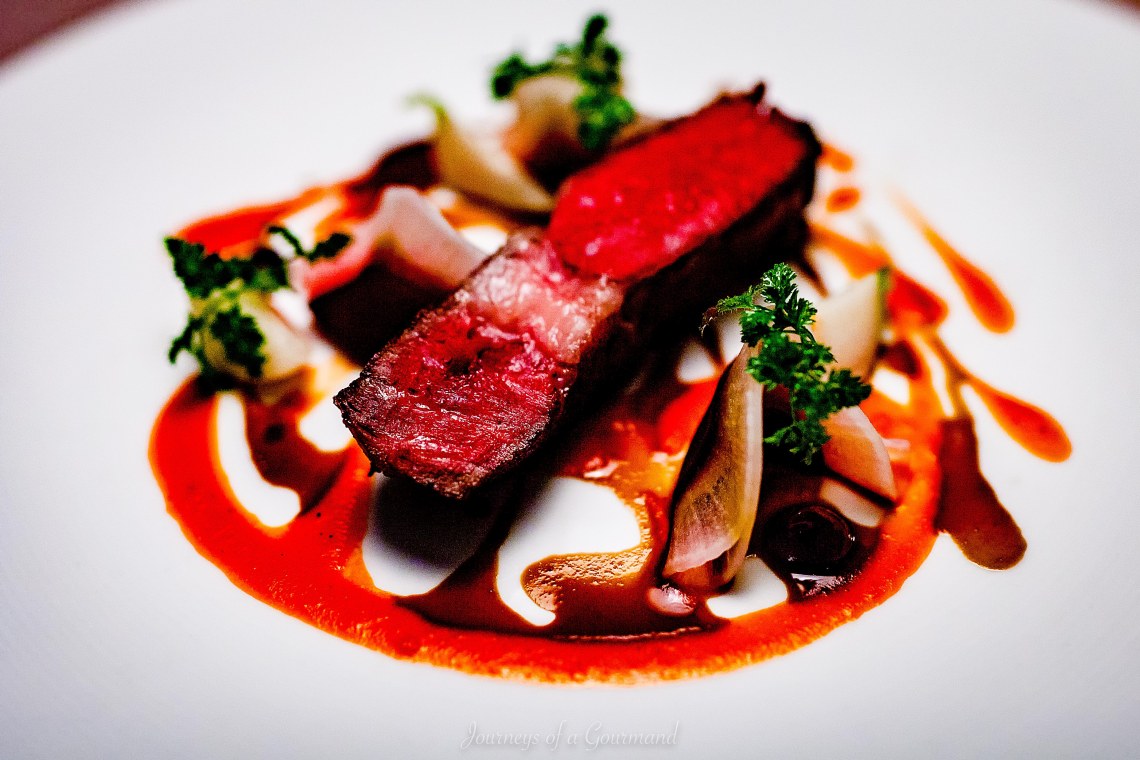 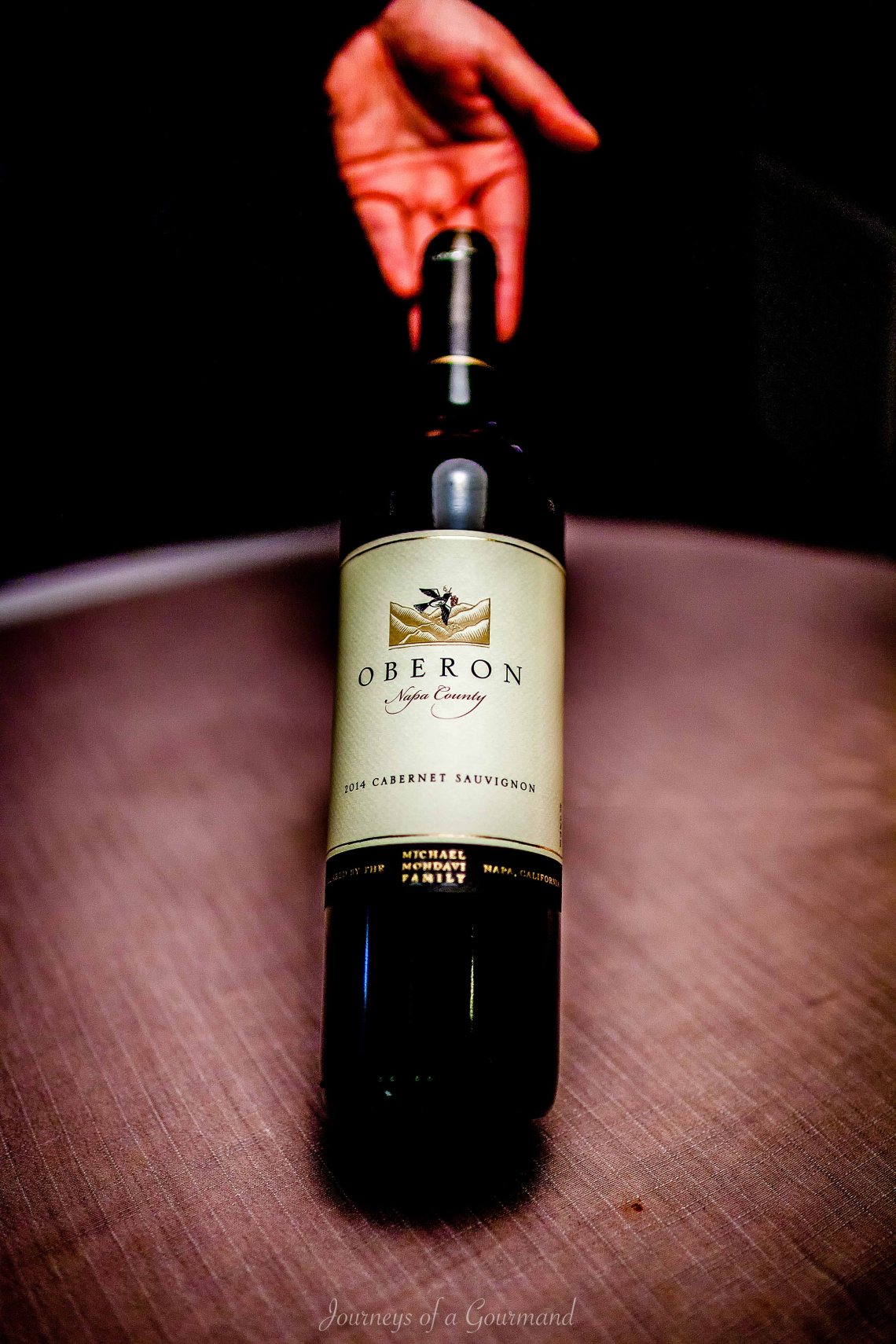 An excellent Cabernet Sauvignon with the beef

To understand just how stunningly marvelous Napa’s food can be when the kitchen gets it right, take a bite of the carabinero. Perfectly cooked and glistening in the center, the prawn assumed a gentle underpinning of dill from a lavishly concentrated sauce. Some powdered caramelized onion brought depth and sweetness, as did the celeriac purée hidden beneath a thin, almost weightless shroud of yuba. Crescents of subtly pickled radish provided brightness right when I needed it, while a few curls of fried prawn whiskers added a surprising dimension in texture. With its clean lines and the expressive flavors, this was Napa at its best. 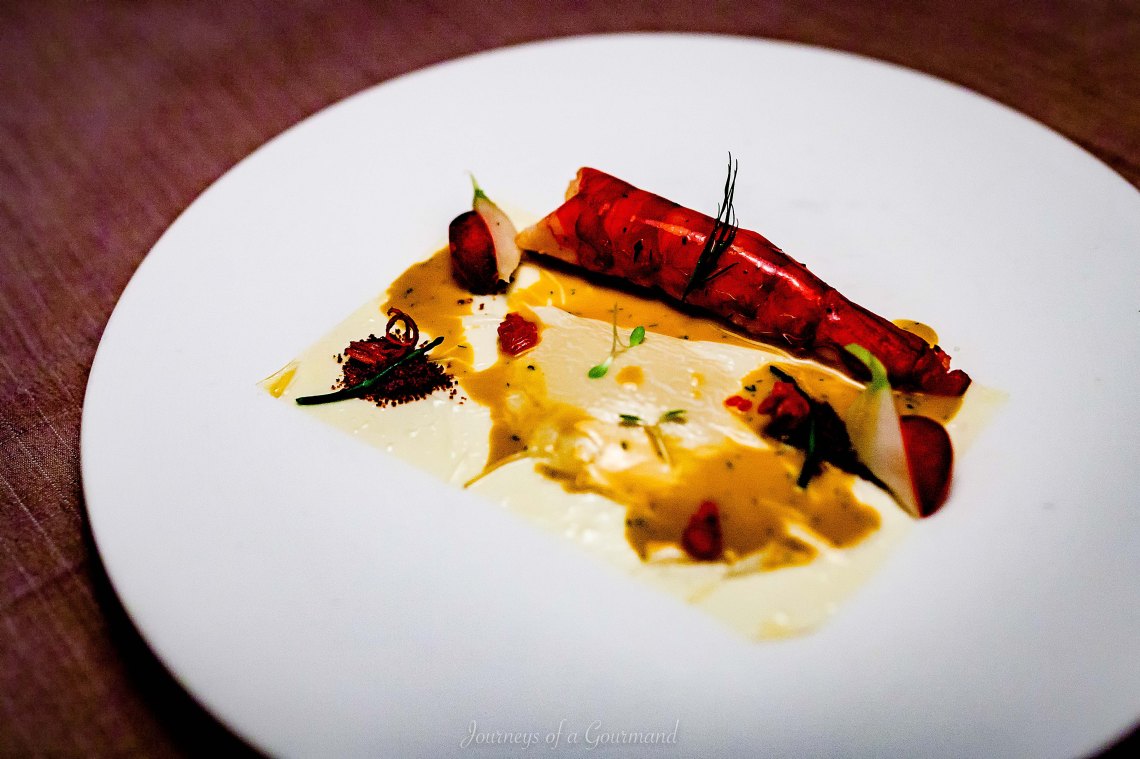 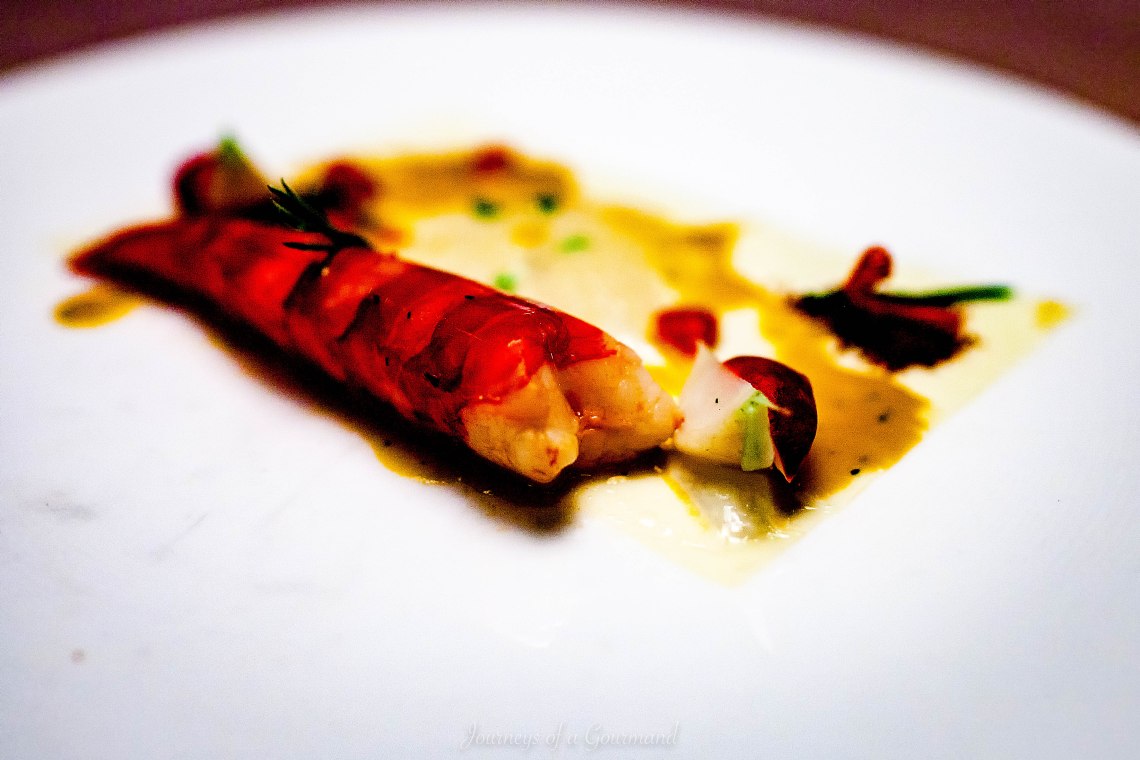 Just as compelling, the verdant arroz verde took its vibrant color from a spinach purée laced with clam stock, while a beautiful mosaic of carabinero perked up the earthy depth with its delicate sweetness. The prawn was a little too frail in texture to hold its own against the firm rice, but the flavors were wonderful. 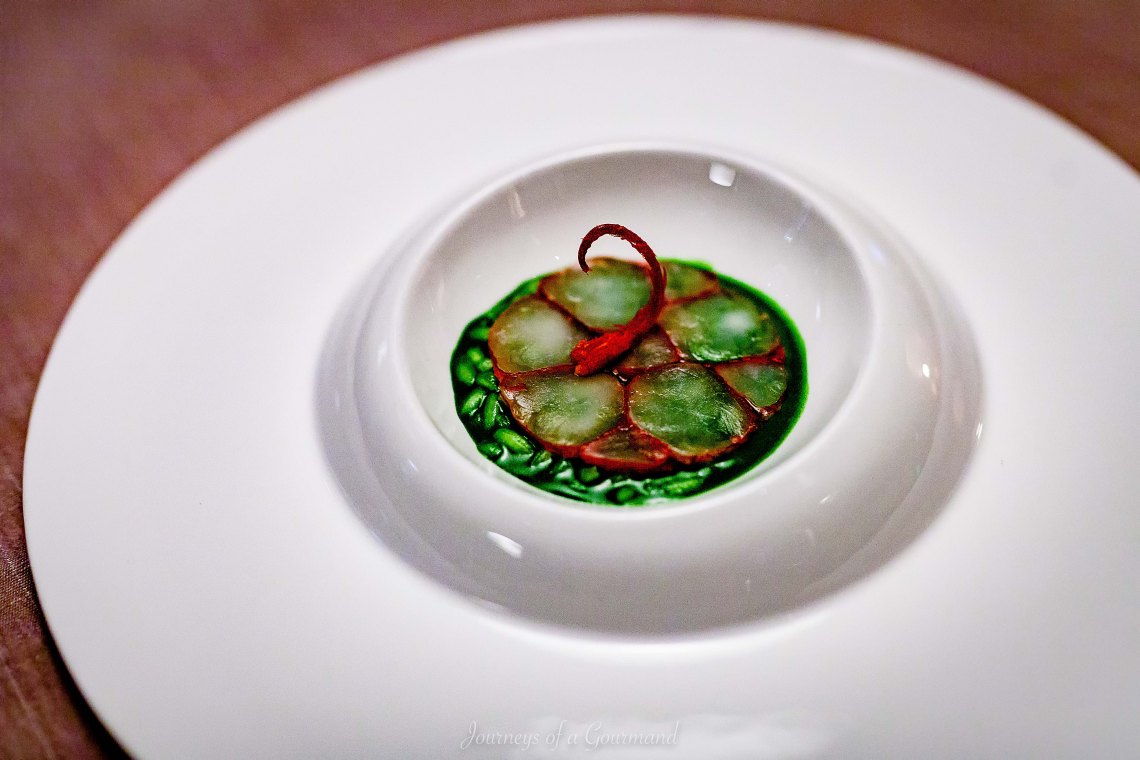 Desserts ended the meal on a playful lilt, starting with a duo of coconut donut and flower-filled “spring roll”, followed by a violet ice cream that was intoxicatingly eloquent. The floral fragrance worked its way into every crevice, transporting me to a spring garden in full bloom, while the crispy edged financiers and a gelée made of late harvest wine gave the plate texture and dimension. The crystal ball was also intriguing, paved with crushed almonds and filled with vanilla custard foam, white chocolate, and a tangy cassis sorbet, but ultimately looked more interesting than it was. 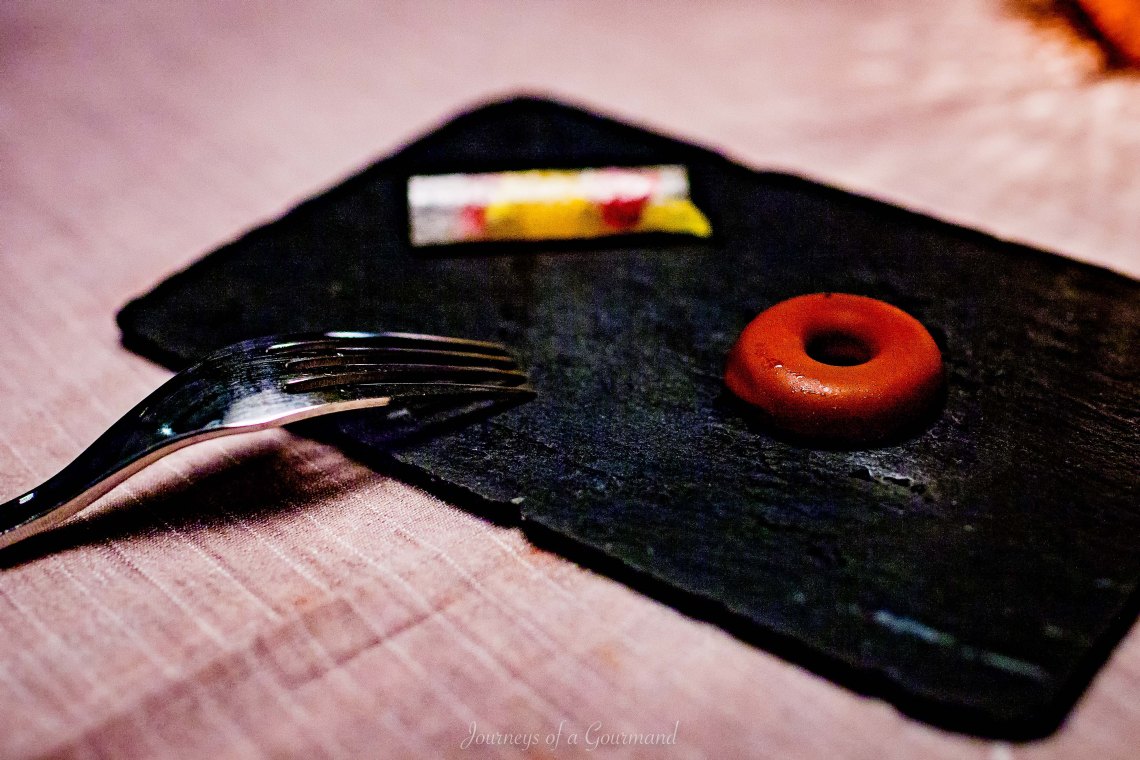 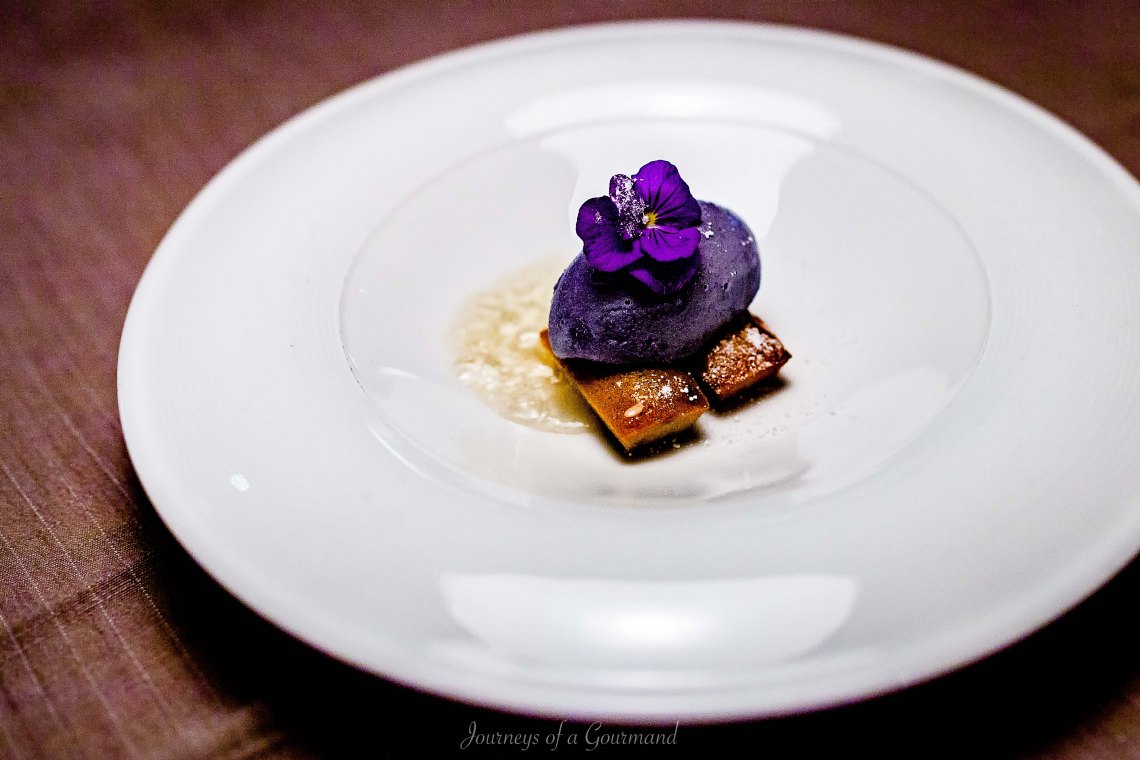 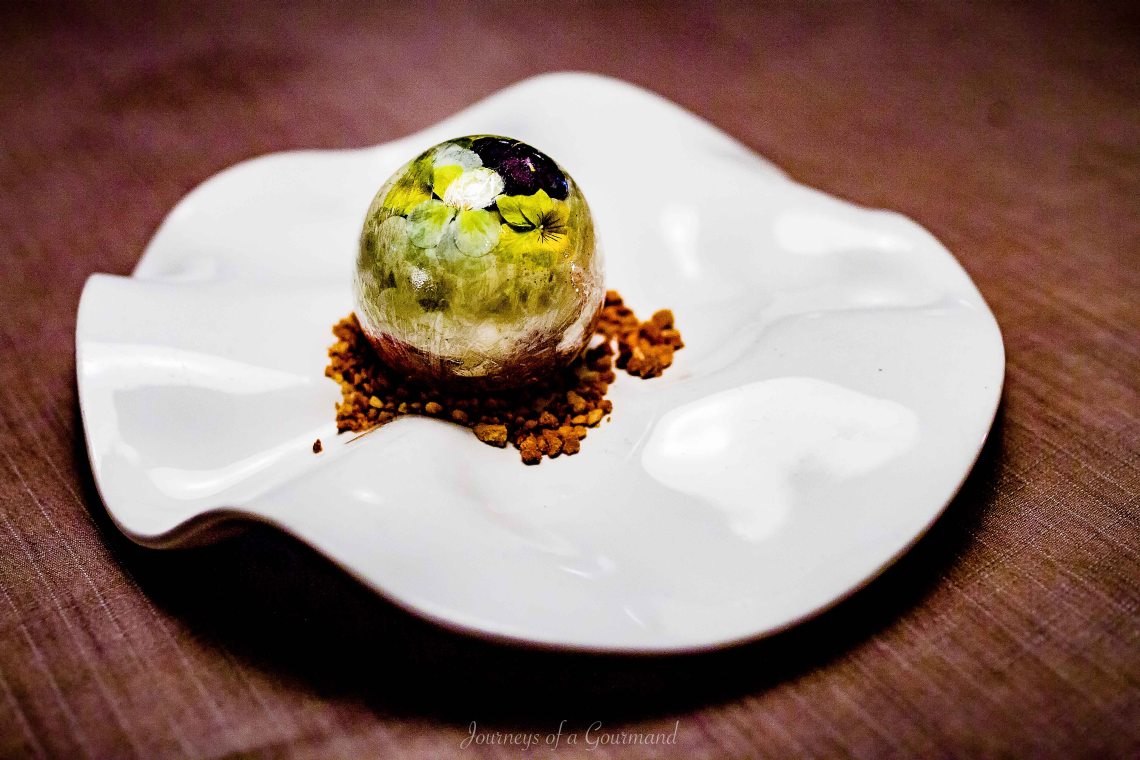 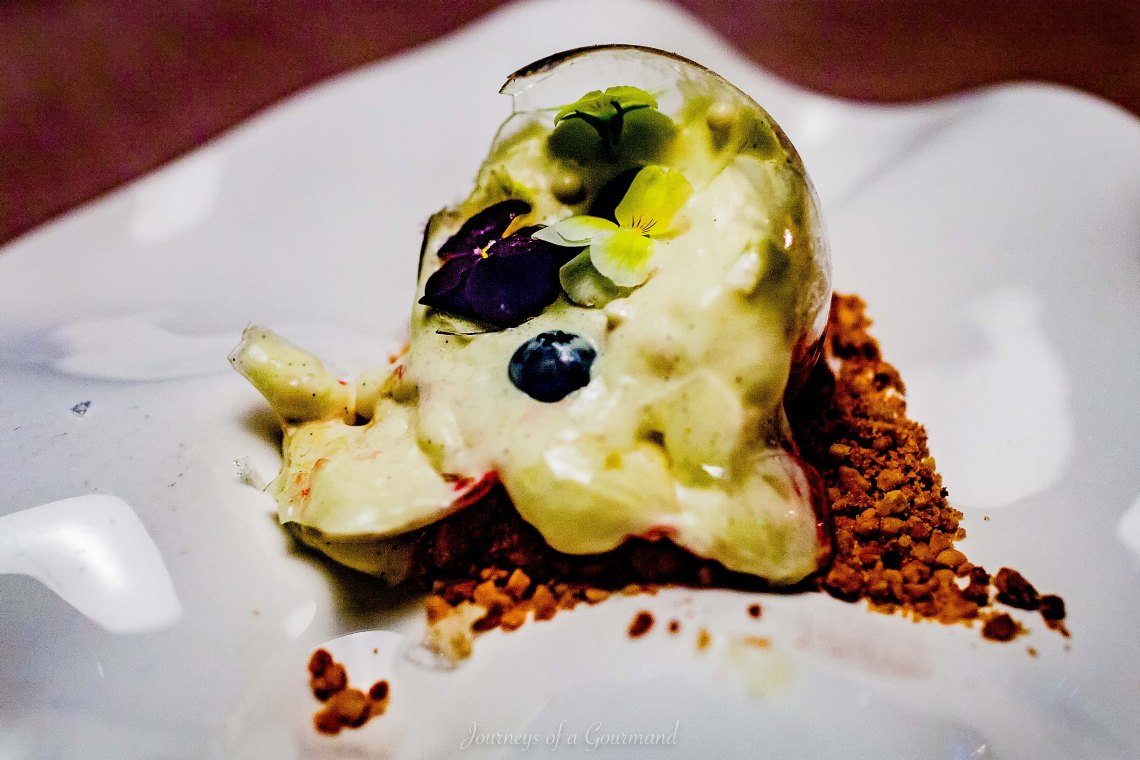 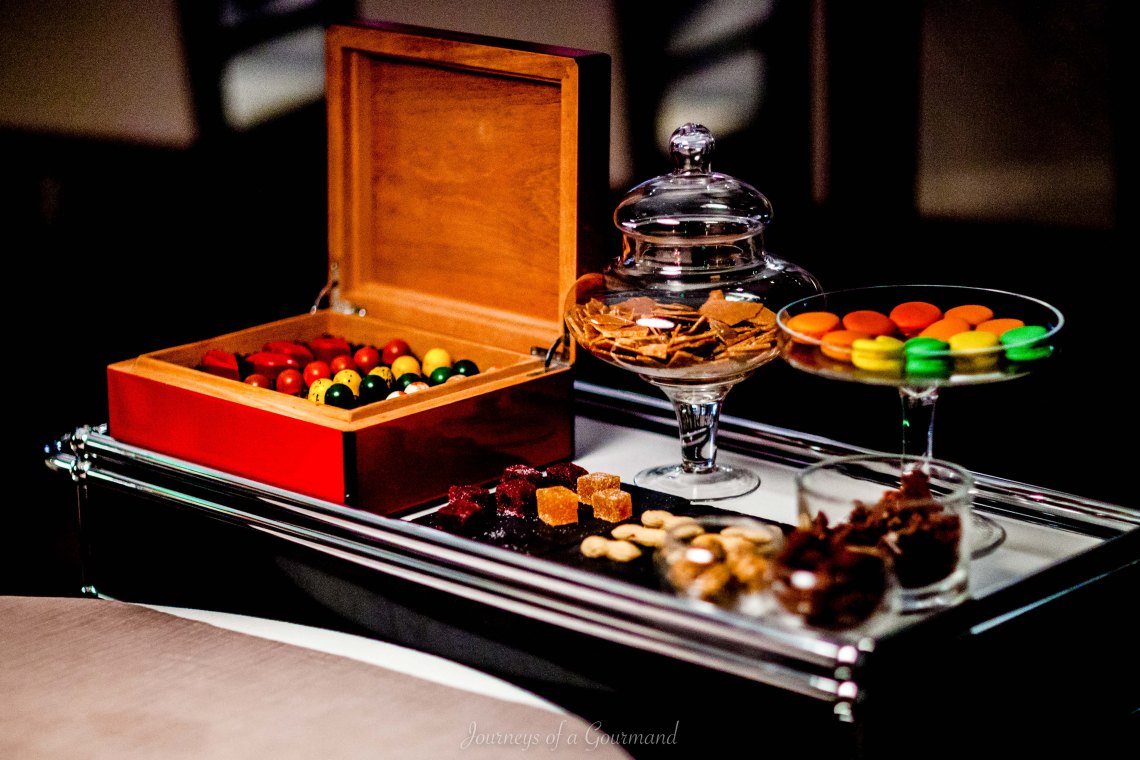 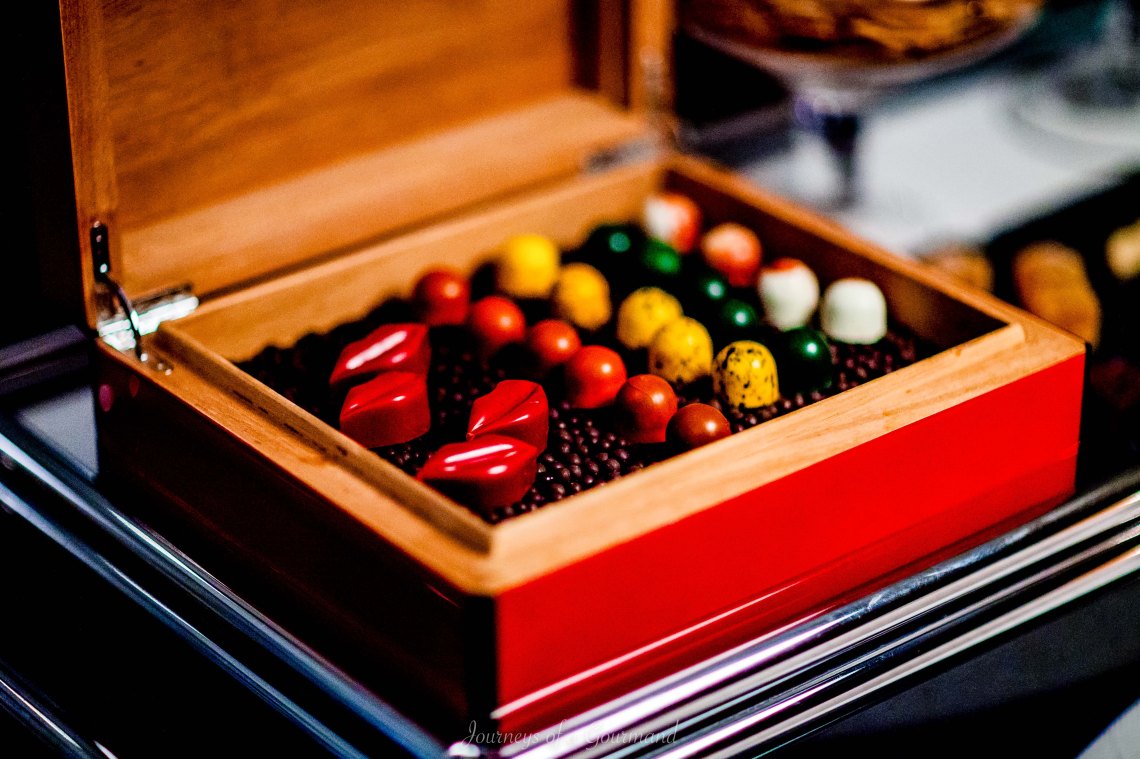 With the level of finesse and composure I witnessed over the meal, there is no doubt that Napa takes its work seriously. But the ambiance is relaxed and unassuming enough, the food tinged with just the right touch of lightheartedness, that you feel comfortable in the knowledge that you don’t have to take it quite so seriously yourself. Out of the dishes I had, some skimmed within sight of perfection; others tasted of second thoughts. Still, Chef Araya managed to give pleasure without going out of his way to please. That is more than I can say for many restaurants in the city. 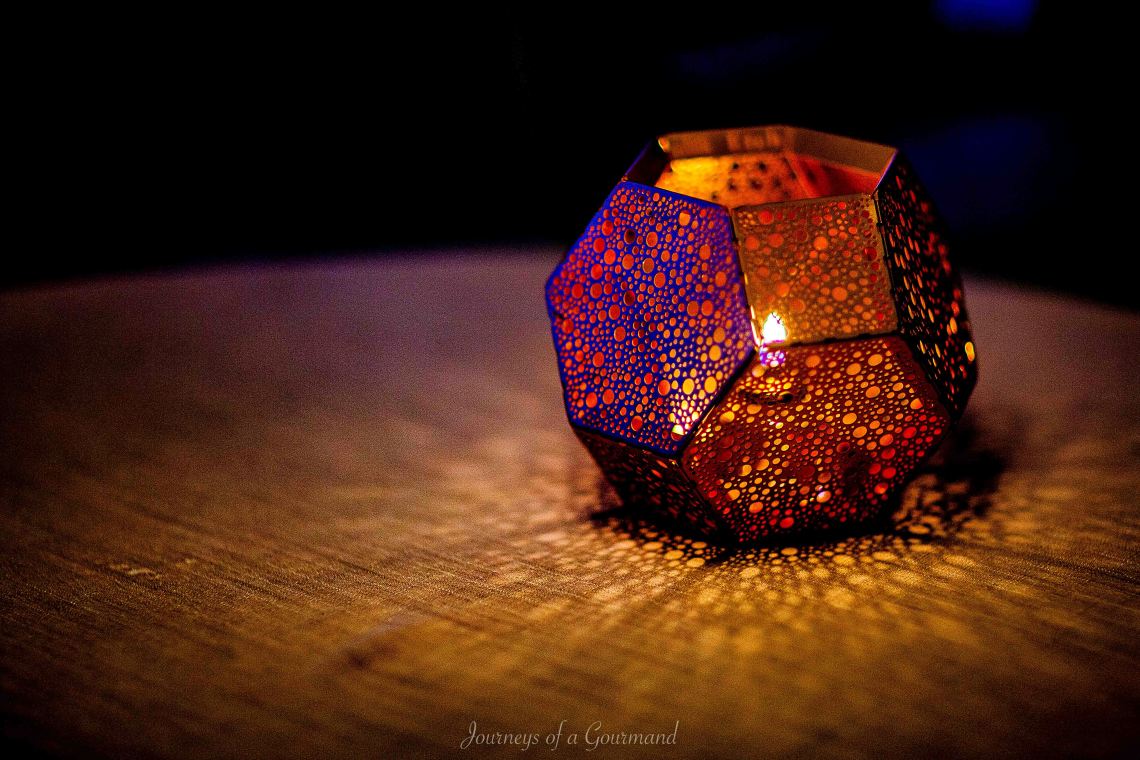